Entitled as Love Star, the channel is soon to air 7Seas YouTube video song is expected to impress the movie enthusiast kid populace today. The video will have its sprightly hero imitating popular dance steps of different Tamil, Telugu, Bollywood and even Hollywood heroes.

"Our YouTube channel is meant to amuse everybody with great YouTube funny videos. Our latest production Love Star is another great video carrying the potential of amazing entertainment for the little ones & adults alike," stated the sales executive from the 7Seas YouTube channel.

He continued, "7Seas is making this 3D Semi Realistic Cartoon Character "Love Star" in a very cinematic style with high quality of technical values, Amazing Visual Graphics with different dance style sequence. Male and Female Lead characters are semi realistic and would really touch the hearts of the people."

Interesting fact about Love Star is that the Music and Lyrics, everyone irrespective of language and country can sing and enjoy the song. Fans of the respective celebrities will feel the thrill of the dance steps. While talking about Love Star, the executive also added, "The hero and the heroine featuring in the songs seem semi realistic and the animation industry is eagerly waiting to see the release of this video which is creating good buzz!"

"Our funny YouTube videos come up with really diverse gaming flavor where we have covered almost any topic, ranging from adventure to mind games to mythology. Our motto is to get something for every taste and hence such a versatile approach. You would love our innovative 3D presentation & premium gaming content," shared the 7Seas manager for the YouTube channel.

Added to the cartoon funny videos, the 7Seas YouTube Channel has also launched some educational videos for the kids. There are videos imparting lessons on body parts and English alphabets too. 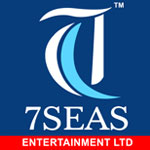