London, UK -- (SBWIRE) -- 10/06/2017 -- The Asia Pacific market for drugs to treat all medical conditions will be worth $255 billion in 2020, having grown from $185 billion in 2016. By 2020 the Asia Pacific market, which was already in 2016 the second largest in the world after North America, will have increased its lead over Western Europe in third place and made gains on North America.

The size and growth of a regional market such as Asia Pacific's for drugs as a whole is related to many factors - size of population, and especially of the older population, of course, and GDP per capita, but also regulatory systems and physician attitudes as well as disease incidence. New drugs tend to be more expensive, while those out of patent can see their price lowered dramatically by the advent of generics, which have seen major growth in India and China. Markets for drugs that can be bought without prescription, such as many for respiratory illnesses such as colds, can grow rapidly as this region's population become increasingly urban and gains access to pharmacies.

The Asia Pacific drugs market's largest segment in 2020 will be in musculoskeletal drugs for treating conditions such as arthritis and osteoporosis, closely followed by cancer drugs. Third largest will be cardiovascular drugs to treat heart-related conditions. Musculoskeletal drugs will have achieved its leading position in 2020 in Asia Pacific through a growth rate that far exceeds that of the other two big segments at 11.6% year on year from 2016. Cancer drugs will grow at 8% a year from 2016 to 2020 and cardiovascular at only 5%.

Other fast-growing segments in the region will be for drugs for blood disorders and metabolic disorders and drugs to treat respiratory illnesses but these are somewhat smaller markets.

Some trends shaping the market include an early switching of the product from prescription to non-prescription status and an increasing demand for new medicines for drug-resistant infections.

1) Early Rx-to-OTC switch, or switching the product from prescription to non-prescription status, is a key trend in the dermatology drugs market. Traditionally, the Rx-to-OTC status conversion was generally observed at a phase nearing the patent expiry or after. However, forward-thinking companies are now looking at switching from Rx-to-OTC well in advance of the patent expiry of the drug. This helps the manufacturer to capitalize on the market opportunities for the product. Early Rx-to-OTC switching also provides an additional benefit as a way to recover all the expenses incurred on the product by the company. A key example from the dermatology OTC drugs market for an early switch includes butenafine hydrochloride (Lotrimin Ultra), an anti-fungal drug. The product was reclassified and switched to being an OTC drug in December 2001, long before its patent expiry (April 2017). It is used in the treatment of athlete's foot, jock itch and ringworm infections.

2) The demand for new drug candidates for antimicrobial resistant infections is increasing. Antimicrobial resistance is a serious concern to global public health as it resulted in long duration of illness, the requirement of additional tests and use of more expensive drugs. Antimicrobial resistance occurs when microorganisms such as bacteria, viruses, parasites and fungi change and adapted to drugs when they are exposed to antimicrobial drugs such as antibiotics, antivirals, antifungals, anthelmintics and others. According to World Health Organization (WHO), globally 4,80,000 people are developing multi-drug resistant TB each year and drug resistance is starting to complicate the treatment of malaria and HIV as well. Companies are investing in developing the new drug candidates to treat drug-resistant infections. For instance, in 2014, Cubist Pharmaceuticals launched a new antibiotic Zerbaxa (ceftolozane/tazobactam) for complicated intra-abdominal infections, complicated urinary tract infections and also for infections of the kidney (pyelonephritis) . Also, Johnson & Johnson launched Sirturo (bedaquiline) for pulmonary multi-drug resistant tuberculosis. In November 2013, Roche and Polyphor Ltd have entered into a licensing agreement to develop and commercialize Polyphor's investigational macrocycle antibiotic, POL7080 for the treatment of Pseudomonas aeruginosa bacterial infections which become resistant to many antibiotic treatments.

Where to Learn More

Read Pharmaceutical Drugs Market Global Report 2017 from The Business Research Company for information on the following:

Sourcing and Referencing: Data and analysis throughout the report is sourced using end notes.

Interested to know more? Here is a full scope of Biologics and Pharmaceutical Drugs Market reports to explore: 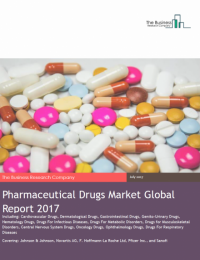