Los Angeles, CA -- (SBWIRE) -- 09/22/2014 -- Most people have, at one point or another, known someone who can’t seem to tell the truth. For them, lying is compulsive. But eventually, their compulsion to lie catches up with them.

Such is the case for Bailey Bryant, the lead character in the Shade Akande’s hit new thriller, A Chance to Lie, published by universal Etch Publishing Co., LLC, and available in bookstores and online at achancetolie.com.

Lies are sort of like newborn babies: they can only survive on continuous feeding. Multiple lies need even more feeding to survive - and Bailey is, one might say, getting full. At first, it would seem that her impulse to lie gets her what she wants in the interim. But after weaving a tangled web of lie after lie, this impulse ends up proving reckless in the end. While she deceives everyone around her, realities unfold before her that only serve to rock her foundation and impact her life significantly.

Bailey's story of self-inflicted pain and heartache is buffered by her loyalty and affection for her friends, her habit of drinking adult beverages, and her penchant for shopping at luxury retail shops. Without them, how could she possibly be able to handle the consequences of her deceptive behavior. Her tale is dramatic, disastrous, and juicy.

Many people can relate to Bailey’s character - and many lessons can be learned from A Chance to Lie. One of those lessons is that a person cannot expect to live a life of lies and deception without expecting that it will come back to haunt a person. At the same time, Akande says, “I was intentional about not putting too much of myself in any of the characters.”

Akande is a native New York resident and a graduate of Syracuse University. She began writing while attending the High School of Fashion Industries and has since written screenplays and sitcom scripts. She came up with the idea for A Chance to Lie while she was driving. Before long, what started as a Post-It note ended up turning into a 280-page manuscript.

About Shade
Shadé is a native New Yorker and graduate of Syracuse University. She began writing while attending the High School of Fashion Industries and has since written screenplays and sitcom scripts. Being a lover of movies, books and sitcoms, Shadé came up with the idea for A Chance to Lie while she was driving and what started as a Post-it note ended up being a 280 page manuscript. 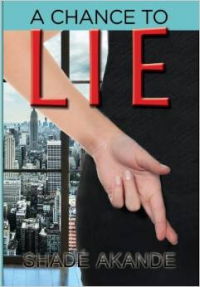