‘Duct Tape Won’t Fix This’ is the upcoming memoir-come-manifesto of Russell Illes; a doting father who has spent almost four decades dealing with his youngest daughter’s six harrowing bouts of cancer. While Illes first thought his nation’s official and societal support systems would leave no family member behind, he has found himself dealing with the anxiety and stress alone. Illes soon identified a rampant epidemic of ‘forgotten fathers’ across the country, and he is soon to launch a new blog and book to provide a ‘dumping ground’ for those suffering through their child’s chronic illness in silence.

Boston, MA -- (SBWIRE) -- 08/27/2014 -- “I can’t even begin to describe how much life changes when you find out that your three year-old has cancer,” admits Illes. “You’re forced in an instant to live a life where hospitals become your second home, medical staff become your closest neighbors and every breath you take shudders at the thought of losing your child. That has been my reality for almost forty years but, being a man, society has wanted me to deal with it without crying, asking for help or even talking about it openly.”

In a unique fusion of memoir and self-help, Illes spares no criticisms when making it abundantly clear that virtually no help or support systems exist for fathers of chronically-ill children. Thirty-two million U.S. families are dealing with such plight, and nobody has yet spoken out publicly.

There’s no way to sugarcoat the harrowing contents of Russell Illes’s upcoming book, ‘Duct Tape Won’t Fix This’, documenting thirty-six years of the author having to deal with the worry and stress of a daughter whose cancer has returned six times. However, it isn’t a cry for sympathy, but instead a bold and brave attempt to start a dialogue among the thousands of fathers who have been forgotten by the nation while dealing with a child’s chronic illness.

Continuing, “These dangerous stigmas lead to men falling off the care and support system’s radar, entering an empty hole where we have to face our own stress and anxiety without assistance from anyone. Like millions of other men, I also became a victim of the 80% divorce rate among families with chronically-ill children and was cut off from any kind of help. I’m not alone, but am now taking positive action.”

‘Duct Tape Won’t Fix This’ and its associated upcoming blog aim to bring the nation’s ‘forgotten fathers’ together, kick-start a dialogue and provide a virtual dumping ground for everyone’s stresses, worries and destructive thoughts.

“You really wouldn’t believe it; there are support programs for moms, siblings, grandparents, cousins, aunts and uncles, friends and kids – but hardly anything out there for dads. They try to class us under the ‘family’ support umbrella but, if we’re all getting divorced, it’s not working! This is a very serious issue that requires urgent action. Through my book and its associated blog I’m going to bring my forgotten comrades together so we can support each other, share our experiences and embrace new fathers who have just gotten their child’s diagnosis and want support from day one. Medical staff expect us to just to shut up, show up and deal with things – so we’re going to say the complete opposite,” Illes adds.

Critics are poised to offer praise for a project that tackles such a sensitive topic with true dignity. ‘Duct Tape Won’t Fix This’ is due for release in October and will be available from the following locations:

About Russ Illes
Russ Illes is a 66 year old father of two grown daughters with three granddaughters. His youngest daughter was diagnosed with ALL at age 3. Over the last 36 years the cancer has returned a total of six times. Each time taking a different form.

Russ has undergone therapy of one sort or another for 15 years and been involved with the Living with Cancer Support Group at South Shore Hospital in Weymouth, Ma. He was a volunteer in cancer hospice care for 8 years.

He is co-founder, leader and participant of a men’s support group that has been together for 26 years.

Russ has been involved with the “Friends of Hope” project at South Shore Hospital in Weymouth, Ma. from inception through implementation. The mission of this project is to give children, ages 4-10, whose parent or grandparent has cancer, a voice. The project is based on the book The Moon Balloon by Joan Drescher and training is provided by the author.

In addition to his volunteer work with the Friends of Hope, Russ has volunteered his time at the Magical Moon Foundation in Marshfield, Ma. which supports children with brain tumors and other life-challenging illnesses.

Based on his 36 years of experience, there is nothing in the community specifically aimed at supporting fathers of children with life-threatening illnesses. Russ’s goal is to create a safe place for dad’s to begin a “conversation”. 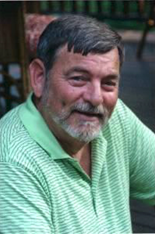