‘A Faded Cottage’ fuses fact with fiction to depict a compelling love story, based around an artist suffering from Essential Tremor. With Shaddox herself also a victim of the neurological disorder, the novel was written to become a vital fundraising tool for International Essential Tremor Foundation.

Aiken, SC -- (SBWIRE) -- 03/06/2013 -- Aiken, SC – While the protagonist in Diann Shaddox’s new novel may appear to have a unique story, his battle with Essential Tremor (causing rhythmic trembling of the hands, head, voice, legs, or trunk) is shared with one in sixty Americans. With Shaddox also suffering the effects of ET, the book is a stark reminder of the prevalence of this often ignored disorder.

‘A Faded Cottage: A South Carolina Love Story’ imparts a powerful message, while acting as a real-life vehicle for vital ET awareness.

A Faded Cottage, When a love letter written by a teenage boy becomes lost after a summer filled with passion, it brings about an incredible love story of two people being reunited, after thirty years.

When Essential Tremors take over a famous artist’s body, a simple feat of holding a paintbrush turns Quaid Witherspoon’s life upside down, becoming a bitter man. This is his journal of how he battles fate, not of his entire life, but of two weeks. Quaid had everything money could buy, except the two things he loved the most, his love of painting great masterpieces, and the only woman he had ever loved. The calming waters off the coast of South Carolina calls Quaid back to Hathaway Cove, to a small, faded cottage, one with a leaning front porch, worn paint so similar to him, flawed. The same beach where he began painting as a young boy, the place he met his one true love, and the place he let her go.

As the author explains, the world needs to do more to push ET into the public’s spotlight, while committing more money and resources to research.

“Compared to other conditions, little is known about ET and the treatment options are limited. ET is not confined to the elderly. Children and middle-aged people can also have it. In fact, new-borns have been diagnosed with the condition. With awareness, people with ET can come out of hiding and live normal lives,” says Shaddox, who started displaying symptoms of ET in her early twenties.

Continuing, “That’s why I wrote the book. I want it to become a long-term awareness/fundraising vehicle. People love a bold story and my book has it all, combined with a real-life awakening to the detriment ET inflicts on its victims.”

To assist in her mission, Shaddox will be donating a portion of all electronic and paperback books sold to International Essential Tremor Foundation, a global body leading the funding of research into ET treatments and a cure.

Critics praise Shaddox for the diligent efforts she is taking. With the book expected to reach high demand, interested readers are urged to purchase their copy as soon as possible after launch.

‘A Faded Cottage: A South Carolina Love Story’ is available from March 17th.

For more information and to keep abreast of the latest news from Shaddox, visit: http://www.diannshaddox.com

About Diann Shaddox
Diann Shaddox is a Native American Indian and a member of the Wyandotte Nation of Oklahoma. She’s an author of A Faded Cottage, book-lover, wife, and mother.

Diann was born on December 18th in a small southern town of Nashville, Arkansas, the youngest and only daughter of William and Mary Ann Shaddox. After the death of her parents, she lived with her grandparents. 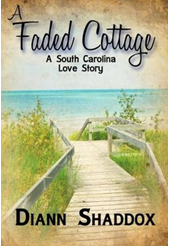