Transporting readers deep into the Missouri Ozarks, Jackson’s latest novel uniquely fuses an engrossing narrative with heaps of historical fact. Depicting one man’s struggle to survive against the odds; ‘A Killer in the Ozarks’ is poised to resonate with readers around the world.

Doniphan, MO -- (SBWIRE) -- 09/23/2013 -- While most modern books of fiction rely on sex, violence and profanity to draw in an audience, Missouri’s H W Jackson is proving that a good, clean and wholesome story can still burst onto the literary scene with gusto. His latest novel, a unique melding of fact and fiction, is rapidly picking up speed as a new release not be missed.

‘A Killer in the Ozarks’ tells the bold story of innate survival; bringing readers to the edges of their seats and sending the imagination soaring.

Lukas McCoy: a young orphan boy trying to survive in the harsh country of the Ozark Mountains, in the early 1900’s. This was a learn as you go, survival test, and he was to learn many things as his struggle continued into his teen and adult years. One trait or ability was the use of a gun; he became very skilled with the handgun; the 38 caliber Smith & Wesson pistol. It became as necessary as food daily, or a blanket in winter; the pistol on his belt. One thing he seem to lack; a conscience, any type of emotion for others, or a sense of humor.

Parents died when he was six months old, taken in by Indians. ‘

Abandoned when he was five years old, taken in by a preacher and his wife, who was murdered when he was eight years old. Lukas McCoy just couldn’t seem to hang on to someone who would take care of him. He never knew where his next meal was coming from, life was a constant struggle. Then he was taken in by his outlaw Uncle. With him, he learned many things. How to use a gun, how to rob banks, how to survive in the Ozarks. And just when life seemed to start his way, he was forced out of his Uncle’s house. On his own again, he vowed he would do whatever it took. He found a place of his own. He found a girl he liked, her father didn’t like Lukas. He got into a shooting feud with a bad outlaw family.

It was shoot or be shot, the number of dead men in his past kept growing. It seemed to be the normal way of things here in the Ozarks. But nothing stays the same, and life was good to Lukas again, and just as he was getting what he had always dreamed of , guess what, it…. well, you need to read the whole story.

As the author explains, he worked diligently to create a novel that appeals to all ages.

“There’s no salty language or vulgar scenes; this is vital if an author wants his or her book to be enjoyed by as many people as possible,” says Jackson.

Continuing, “My book boasts a little mystery, a lot of thrills and a little dab of romance. The story holds moments of sadness, amusement, danger, and times you will be angry.”

“A fascinating and engaging story about one of the many men that settled the wild, raw Ozarks. Told in the plain spoken way of the 1900s, a time that molded men by "ways and means". All manners of men; those that were needed to tame the land of the Ozarks. Land we now call home as we sit drinking coffee and iced tea out on our decks. A salute to those men and to the storyteller,” says Manda Seats, reviewing the book on Amazon.

Brain W. Rossbach was equally as impressed, adding, “It was refreshing to find a good mystery that wasn't dependent on blood, sex and foul language to hold the readers interest. I have never been to that part of Missouri but I was able to see it through the writers words. I don't mean to leave people thinking this is a love story, it's full of people we see every day, good ones and really bad ones.”

‘A Killer in the Ozarks’ is available now:

About H W Jackson
H W Jackson is a retired law enforcement officer, lives in the Missouri Ozarks.
His hobbies are hunting, fishing, cooking out on open grills,and enjoying retirement. He has been accused of being a teller of tall tales. 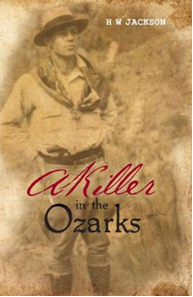