A Life Interrupted: New Book by Kristi Loucks Frames Love As the Ultimate Catalyst for Survival and Healing

Following a lifetime of dedication to protecting his family and home, Jared BelaForte’s existence is suddenly uprooted and his life changes forever. As he scrabbles to save both himself and the ones he loves, will hope be the ultimate facet of their future?

Lake Forest, IL -- (SBWIRE) -- 07/13/2012 -- Making her official debut onto the literary scene, Kristi Loucks is delighted to announce the launch of her new novel – A Life Interrupted.

In short, A Life Interrupted takes readers on the ultimate journey of one man’s survival. Following Jared BelaForte’s sudden kidnap and the subsequent tearing apart of his family, readers are thrown into the centre of his efforts to save both himself, his family and everything they came to perceive as ‘normal’.

“Jared BelaForte spent his life protecting the people he loves and the place he calls home working for a government appointed task force called The Greater Wilmington First Response Team or GWRT. A group comprised of his friend and half brother, Dylan Spencer. his father’s old partner on the Police Force, Alex Kelley and his cousin Jules Devereaux. Rounding out the team was Shay McElroy, a profiler who also happened to be the love of his life.

Everything seemed perfect in his life, he had love, friends and family surrounding him and his team was on the verge of putting an end to the reign of a known trafficker who dealt in drugs and women. But in one moment, the man Jared had spent years trying to put away interrupted that life.

Sergei Dolenov is that man. He deals in drugs and dolls, a family business you might say. He had been able to stay under the radar in the sleepy port of North Carolina that he called home these days. But when the Governor put together a task force to disrupt his business, he took on a new target. Jared BelaForte.

After two years of torture and pain, Jared believed he would die in Dolenov’s “care”. But just when all hope is lost, an opportunity to escape presents itself. Two years to the day, Dylan got the phone call. Jared was in the local ER, and he was alive. Jared also learns that there was one other person that was left behind when he went missing, his little girl Sera, just 17 months old. She was the glue that held Shay together when all seemed lost to her.

Can he pick up the pieces before the man responsible returns to finish the job he started?”

Following a lengthy period of writing and editing, Loucks is excited about the book’s launch.

“This book is the culmination of years of work and a lifetime of dreams. I’ve received huge support from everyone around me and cannot wait to see the book being enjoyed by readers around the world” she says.

Continuing, “The story is ultimately about hope. It’s proof that when times get tough, love will always exist and bring people back together. The story’s lessons are directly applicable to everyday life.”

To find out more about A Life Interrupted, please visit the book’s official Facebook page:http://www.facebook.com/ALifeIterrrupted

Her progress can also be followed on Twitter: https://twitter.com/#!/LoucksKE

About the Author:
Ms. Loucks is a graduate of Le Cordon Bleu Chicago and spends her days working as a Pastry Chef and Cake Designer at her own Wildflour Bakery. From an early age, Kristi’s creativity has always been a driving force in her life whether it be in the world of pastry or crafting a story. 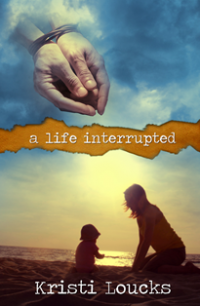