A Love to Kill For: Compelling New Murder Mystery Fuses Lust, Envy and Greed Into One Wild Week in New Jersey

In her latest novel, author Marlene Sardoff assembles a band of characters with murky pasts and thrusts them into a gripping murder mystery. Is their gated community really that safe?

Brooklyn, NY -- (SBWIRE) -- 11/28/2012 -- To most, the allure and comfort of a gated community brings the security that allows its inhabitants to sleep peacefully at night. However, for the characters in Marlene Sardoff’s latest novel, life is anything but peaceful.

In fact, ‘A Love to Kill For’ will also suck readers into its unpredictable and suspense-filled world, for the literary ride of their lives.

“A murder mystery that tells the story of lust, envy, and greed on the part of a racy cast of suspects, all of whom have motives or a murky past. Hidden Valley, a posh enclave where nothing is what it seems. In this land of good and plenty, there's plenty that's not good. A cast of characters as human and real as our neighbors have secrets to die for...and kill for.. Thrust in suburbia's seamy side is world celebrated artist Dorian Oberon, a woman of extreme beauty and fortune. But like Hidden Valley, nothing is what it seems. Years of deception and a fatal love affair lay hidden behind her image of perfection.

As the author explains, her book keeps readers guessing with each turn of a page.

“Like any good murder mystery, the reader never knows what is coming next in this pristine New Jersey gated community,” says Sardoff.

She continues, “The book’s life-like setting sets it apart from some of the more less-believable murder mysteries on the market. While wild and crazy at times, the book’s plot could very well play out in real life.”

“The desperate denizens of this exclusive hamlet had me laughing and guessing until the very end. There is no stone left unturned, no end left loose, in this well-plotted tale. A touch of the mysterious, a touch of the satirical, a touch of the kooky, and a touch (well more than a touch) of sex in the suburbs make for a fun read,” said B. Roman, who reviewed the book on Amazon.

Another reader, Fred L. Kessner, was equally impressed. He said that, “A LOVE TO KILL FOR takes place in a pampered gated community in New Jersey, so elegantly described that you would love to live there--that is until you met the residents, a collection of tart-tongued fornicators who will exercise your funny bone as well as your synapses as they cavort their way through the area with an assortment of motives to kill an array of persons who cross their paths. But there is one woman residing there whom you would love to meet--the heroine, Dorian Oberon, beautiful, accomplished, empathic and endangered, with a fascinatingly tangled past that intrudes into the present. Each chapter chock full of surprises. A fun thriller!”

‘A Love to Kill’, published by CreateSpace, is available for purchase from Amazon: http://amzn.to/TZ47Wl

The book can also be found on Facebook: http://on.fb.me/WrO85f

About the author, in her own words
Besides writing I wear many other hats...artist, decorator, antique aficionado, tennis player, and grandmother to five terrific granddaughters (Who incidentally are not allowed to read my very sexy novel A LOVE TO KILL FOR until they are at least forty.)

I was a typical kid growing up...(who can really define typical?) looking back I always loved to write.. mawkish poetry, love sayings to that cute guy in science class, absentee notes, and those moronic verses in graduation autograph books.... Fast forward to short stories, essays, bios, amusing anecdotes (at least I thought they were) and those two unsuccessful novels pounded out via a manual typewriter and turning yellow in a locked drawer. But then, hello, along came a writer's dream, a Brother's word processor, now a dinosaur and collector's item... to be replaced by that modern marvel, Windows 5,6,7, and soon 8, 9, and 10.. Not to mention the Internet and Google, that invisible whiz kid who guarantees perfect spelling to all who were smoking in the bathroom during high school English 101.

Did I also mention that I also write responses to ads for single match-ups? That's because I am now a woman at large, having been a widow for the last six years. I had married my high-school crush, though I wasn't his; at thirteen I was as were my two previous novels, a work in progress. But time and advice from Cosmopolitan and Dear Abby transformed this shy pubescent juvenile to a well-developed female, both mentally and especially physically, and the rest is history. The following decades spawned two gorgeous daughters, a dreamy handsome son, a houseful of antiques, reams of unpublished manuscripts, and wonderful memories. 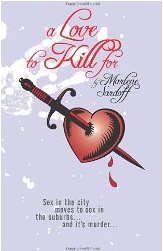