A Most Memorable Quinceañera: Debut Novel Spotlights Issue of Teen Pregnancy Within the Hispanic Community

Written by Leslie Concepcion, this whimsical and often humorous novel celebrates the time-honored tradition of the Quinceañera.

Bridgeport, CT -- (SBWIRE) -- 03/27/2014 -- Although the Hispanic population is the fastest growing minority group in the United States of America, there is still a dearth of published fiction geared toward their communities. Author Leslie Concepcion would like to change that, and with the release of her debut novel, ‘A Most Memorable Quinceañera’, Concepcion hopes to reach out to Hispanic youth and offer them fiction they can relate to, and recognize themselves within.

In ‘A Most Memorable Quinceañera’, main character Mimi is dreading her own Quinceañera, a day that should be like a fantasy come true. Feeling trapped by her impending adulthood, Mimi’s feelings of panic are made even worse by her cousin, who is only one year older than Mimi, Lala’s pregnancy announcement. Mimi wonders – how can one day make her into a woman? And is she ready for the responsibilities and pressures that come with adulthood?

A dazzlingly accurate portrayal of the uncertainties and daily agonies of leaving childhood behind, ‘A Most Memorable Quinceañera’ is also a multi-layered portrayal of a community that has a growing epidemic of teenage pregnancy.

“My aim was not only to write about life as a Hispanic, but also to shed light on a serious issue within the Hispanic communities -- teen pregnancy,” says the author. “Statistics show teen pregnancy continues to escalate at an alarming rate within our communities. Is there a correlation between the Quinceañera and teen pregnancy? Hopefully this book will be the beginning of a discussion about this issue. I’m also hopeful that we can begin to examine why so many Hispanic writers go unnoticed and unpublished – despite their tremendous talent.”

The magical day, when a girl can play out her own fairytale fantasy and be a princess for a day, is her Quinceañera, and for Mimi that day has finally arrived. But instead of the excitement and jubilation she is expected to feel, all she can summon is uneasy dread and anxiety about what this day means. Her parents have been planning this event her whole life and Mimi is filled with the weight of their expectations, to act like a proper lady and know what to do. She doesn't know what to do and can’t comprehend how an archaic ceremony can change the way people see her, and how she could be a woman just because the calendar marks her a day older. Mimi doesn’t want people to treat her differently and no amount of rehearsing can mask the insecurities she feels.

To make matters worse her cousin, Lala, picks the day of Mimi's Quinceañera to reveal she is pregnant, and it's only been a year after her very own Quinceañera. Mimi is distraught and believes that is what happens when parents, family, and society, rush a girl into womanhood. This is all the more reason for Mimi not to accept the tradition of publically becoming a woman.

This is a coming of age story about two cousins, who are the best of friends. While her cousin, Lala is thrilled to enter womanhood, Mimi is not so enthusiastic and doesn’t feel she is ready for all the social responsibilities that come along with being a woman. The girls will learn to stick together and that the bond between family is stronger than any rite of passage.

Since it’s publication, the book has earned a five star rating on Amazon and glowing reviews.

“Engaging story of a young girl and her family. Thoroughly enjoyed reading this book. It was a fresh unique perspective on the topic of quinceneras. I would highly recommended this to a young girl going through the process and a family invested with her,” wrote Deborah Rosa.

“Great book about the Quinceañera culture. As a mom of a soon to be teenager, I will pass down this book to my daughter so that she can learn about the culture and the importance of family,” wrote Jessica Cortez.

“A Most Memorable Quinceañera, is a wonderfully human and culturally sensitive story about a Latina girl's passage from childhood to womanhood. Mrs. Concepcion captures all the fears and apprehensions of this passage from a young person's point of view and allows her characters to make mistakes and misjudgments along the way. The author's interweaving of the Quinceañera ceremony makes for a fascinating exploration of growing up. In the end, the greatest discovery is that no one has to fear the future if there is love and support around you,” wrote Gayle S. Hoffman, MSW, ACSW.

‘A Most Memorable Quinceañera’ is available now: http://amzn.to/NOtXAR

About Leslie
Leslie is a writer, playwright, poet, who discovered her passion for story telling at an early age. Growing up in an inner city, with a large family of Puerto Rican descent, is the inspiration of most of her writing which celebrates traditions, customs and rites of her culture. She lives in Bridgeport, CT with her family. Readers can read more at her blog at http://lilahthewriter.blogspot.com/ 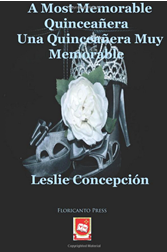