Written by Aum Nicol, ‘A Multicultural Alphabet’ encapsulated all that makes millions proud to be Canadian. Inspiring young readers to embrace their culture and celebrate true diversity, Nicol’s unique children’s book is set to resonate with readers from the rocky shores of Newfoundland to the sleek skyscrapers of Vancouver and the oceans of ice in the Arctic.

Grande Prairie, Alberta -- (SBWIRE) -- 08/20/2013 -- To inspire children to celebrate their international threads tightly-woven in the fabric of Canadian diversity, Aum Nicol is delighted to announce her new alphabet book. A Multicultural Alphabet is a microcosm of diversity in itself; with her family at age 3, the author moved to Canada from Trinidad, later marrying her husband of Scottish descent.

In Canada, most of our ancestors have come from some other country!

Each letter in A Multicultural Alphabet provides a glimpse of Canada’s land, history and culture. It also shares some vocabulary from the Multicultural Act of Canada, a vision of Prime Minister Pierre Elliott Trudeau in 1971, which was unanimously passed by both the House of Commons and Canadian Senate July 1988. Canada is the first country in the world to have a Multiculturalism Law.

As the author explains, the curriculum is the perfect place to be teaching multiculturalism.

“Over my twenty-seven year teaching career, I recognized in my students true diversity and the international cultures that makes up our great nation. I have come across wonderful alphabet books on mountains, prairies and hockey. But there was no book that celebrated cultural diversity. I decided to write one that would actively support curriculum. I began my research with the Multiculturalism Act of Canada”

Continuing, "I hope it empowers young people to be proud Canadians and be curious of their ancestral backgrounds no matter how many generations they've been in Canada. I can identify with the many students I teach. In the mid-60s, there was a call for immigrants from Commonwealth countries to teach in the northern areas of Canada; that's why my parents came. This call still continues today. By writing, A Multicultural Alphabet, it is my dream that Canadians celebrate and embrace cultural diversity and come together under one flag.”

Nicol was also driven to publish her book by something far more personal and poignant.

“July 2012, I learned I had breast cancer. I decided to self-publish my alphabet book-if only to keep my mind from focusing on a year of pain caused by chemotherapy and radiation treatments. My husband encouraged me to illustrate it too. I got up each morning directing my focus on my book not the pain. It is because of the cancer I had the gift of time to work on my dream."

Critics praise the author for her diligent attempt to develop a book that will serve as a positive influence on children from coast to coast.

There’s a buzz and with that comes increasing popularity. Interested readers are urged to purchase their copies as soon as possible.

About Aum (Persad) Nicol
Aum (Persad) Nicol was born in Port of Spain, Trinidad and moved with her parents to rural Alberta in 1967. Her ancestry is from India and her Canadian husband’s is from Scotland and Wales. Raising their two children in a multicultural home, having a multicultural family and teaching children of many races and nationalities inspired her to write A Multicultural Alphabet. She has taught elementary school for 27 years. Mrs. Nicol is a self-taught artist. 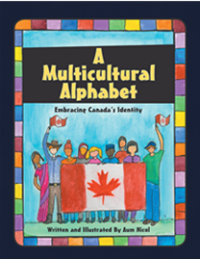