A Pop Prince and a Mysterious Princess

New York, NY -- (SBWIRE) -- 09/03/2013 -- Australian pop prince Matthew Najar may have found his princess, it has been rumoured. New reports show that the young singer has found himself a girlfriend. The source of these rumours is unclear at the current time however Hollywood entertainment critics claim that the rumours appear to be valid. Some fans speculate that the singer is in a relationship with the unknown girl in his music video for hit single ‘Don’t Need Clothes’.

The question remains, who is this mystery women? Najar has been linked to famous faces in the past and is notorious for going to extremes to protect his private life. Recently, one of the singer’s private apartments was discovered in Adelaide Australia, said to be the location the singer retreats to when not working in the public eye. Najar has often disappeared from public view when not promoting music or charity work and has a reputation for being hard-to-find.

In the fall of 2013 Najar will release his highly anticipated album ‘One’ worldwide. With the news of his major upcoming album, a girlfriend and a world tour, Matthew Najar is the one star to watch this year. 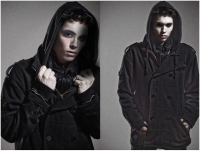