Tourists from all over the world can come and experience Polar Night in person while being pulled by Alaskan huskies through the frozen landscapes.

Hampshire, UK -- (SBWIRE) -- 03/09/2015 -- Duncan Trevithick has created a short documentary titled Polar Night that tells the intriguing story of people living and working near the Arctic Circle in a remote Norwegian town. The short film shows their thoughts and feelings while waiting to see the first sunrise after more than two months of darkness.

Polar Night will transfer the audience into a new world, away from the hectic lifestyle of the modern world. They will travel by magic and the power of film into the quiet and even still life of people who live in Kirkenes, a remote Norwegian town, located just 250 miles from the Arctic Circle.

The filmmaker spent over four months from Sept 2014 till Jan 2015 in this intriguing place to catch the moment when the sun is about to rise again after a period of more than two months. People can feel the excitement and joy this sunrise brings to the local people, who cope with two months of a long darkness every year.

The audience will be captivated by the breath-taking landscapes, the beauty and mystery of northern lights. The attractiveness of the slow-paced and stress-free life in this frozen location, where Alaskan Huskies are people's best friends, is like another world.

To watch 'Polar Night' documentary and to feel what the life is like in Kirkenes, Norway, please visit https://vimeo.com/118815958

About Duncan Trevithick
Duncan Trevithick graduated from UCA Farnham with a BA in Film Production in 2013. He worked more than four months in Kirkenes, Norway as a tourist guide while making the film during the last two weeks of his stay there. 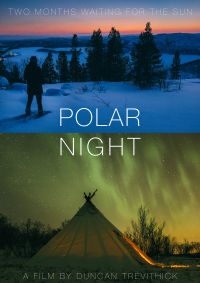