Aaron William Benjamin Will Be UAE's Next Prospect for IPL

Dubai City, UAE -- (SBWIRE) -- 08/31/2020 -- Aaron William Benjamin is the next big thing to come out of the United Arab Emirates and more so the Middle East. Racking up so many wickets in his still young international career, his future looks very bright.

Dominating in the age group domestic scene in the UAE, Aaron holds the current record for the most wickets taken by a fast bowler in a single season (22 Wickets). As impressive as this feat was, he hopes to one day play in the IPL.

Following in the footsteps of his hero's Lasith Malinga and Chaminda Vaas, he has even been credited by the latter as a future prospect to keep in arms reach. Working with him in Sri Lanka, Aaron learnt a lot from Chaminda Vaas and has been seen to be at a level far superior to his age group colleagues. For instance, when playing a match against India U19, he faired so well as to take the wickets of the then Captain and Vice-captain, showing the world that he indeed has what it takes to play at the men's International level and even one day the Indian Premier League.

About Stardesk
Stardesk is popular Indian news blog on Entertainment, Sports and Lifestyle. 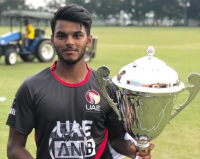