New York, NY -- (SBWIRE) -- 06/18/2013 -- One occasionally hears of a rare discovery where a painting by a significant artist turns up at a rummage sale or in someone’s attic. But an entire boxful neatly tucked away and unseen for fifty years? That was the case recently in the “Hell’s Kitchen” Manhattan residence of 87-year-old artist George Vranesh. The works were found by Michael Montanaro, 36, a former Newport, R.I. gallery owner who recently relocated to New York to work more closely with Mr. Vranesh on cataloging and showing his large body of work. In May, while Montanaro was shipping works on paper to clients, Vranesh mentioned that he thought he had shipping tubes in his basement workshop. After moving an old tool cabinet, Montanaro came across a large taped box, opened it, and found inside 17 mint condition oil on canvases from the late 1950’s - predominantly abstract figurative pieces - from Vranesh’s work during the New York School Modernist period. The first piece out of the box elicited an explicative exclamation, admits Montanaro. Realizing what he’d found, instead of looking through all of the contents of the box, he carried the find to Vranesh’s upper floor apartment to experience the discovery together, and eliciting the exact same explicative response from the artist. “It’s just great quality early painting,” said Montanaro, “thus growing the collection of his early works by a full third. These early pieces of George’s are his unique artistic voice, which he discovered early on as an artist, and which has remained with him these 50 years.” To view the newly discovered 1950’s early works or other of Vranesh’s works from periods between 1955 - 2013, studio visits can be made by appointment by contacting Elizabeth Montanaro at emontanaro@gmail.com or by visiting www.GeorgeVranesh.com.

Born in 1926, George Vranesh served in the United States Navy during World War II and graduated from the University of Iowa with a Masters in Anthropology. While in his first year of doctoral studies at Yale, Vranesh was painting in his backyard when a neighbor friend from the Architecture school suggested that he go to the Art Student’s League in New York. “And in the fall I was there,” says Vranesh. At the Art Student’s League, Vranesh studied under the artist Will Barnet in the mid 1950’s. Montanaro notes that Vranesh’s other early influences included Stuart Davis and Fernand Leger, and among his contemporaries were fellow 10/4 Group artists Jon Stephan, Bob Kane, Dick Spyer, and Marve Cooper among others. Vranesh’s longtime Hell’s Kitchen neighbor was Steve Wheeler, a leading figure among the Indian Space painters in New York in the 1950’s, a group which also included Howard Daum, Peter Busa, Robert Barrell and Will Barnett.

Michael and Elizabeth Montanaro, both graduates of St. Michael’s College in Burlington, VT, previously owned and operated Montanaro Gallery in Newport RI, which opened in 2006. The gallery was known for introducing Newport to “outsider art” (self taught artists), and also featured pop surrealism, urban art, surf culture art such as surfboard shows, and rechampioned modernism. “Most galleries there were showing nautical themed work, whereas NY was our major influence.” His first encounter with George Vranesh was also the result of a discovery of sorts, when he saw a print of one of Vranesh’s works, which the artist had given to a house painter friend of Montanaro’s as a gift. The friend told Montanaro that the house was full of works that he “had to see.” “I called and called, and finally spoke to George’s wife Peggy. I said I’d like to see more art and was interested in exploring a show. George and Peggy showed up at the gallery that day on their bikes.” After closing their gallery in Newport, relocated to NY to work more closely with Vranesh as private dealer and with other artists, as well as organizing and cataloguing Vranesh’s works.

“I keep finding new material - wild - so much stuff. Hollis Taggart has shown a couple of his early works, as have Borghi Fine Arts and Gary Snyder.” This spring, while framing pieces at nearby Jadite Gallery, the owner asked Montanaro whether Vranesh would be interested in hanging a show of his work. Together the artist and archivist have curated an exhibit of George Vranesh’s selected pieces from over 50 years of creative works, including original works on paper, limited edition prints and original paintings on canvas as an introduction to the artist’s prolific oeuvre. The showing at Jadite Gallery opens July 2 from 6 - 8 pm, and will run through July 20.

The late Hilton Kramer, celebrated former Chief Art Critic for the New York Times, as well as for The Nation, and columnist for the New York Post and the New York Observer, recently wrote the foreword to one of Vranesh’s catalogues, in which he noted: “In his own American generation, George Vranesh has thus been something of an odd man out. What the poet Wallace Stevens once called a rage of order put him very much at odds with the work of many of his immediate contemporaries. He has never been tempted by the romanticism of the Abstract Expressionists - repelled, perhaps, by the disorderliness of the Expressionist impulse. Yet the vein of poetic sentiment that is central to his art also made George resistant to the appeal of the Minimalists and the Pop painters of his own generation. He has always gone his own way in creating a distinctive and highly accomplished pictorial oeuvre that should long ago have been recognized as belonging very much in the mainstream of American Modernism.” 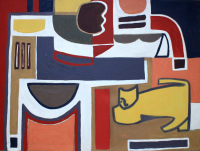 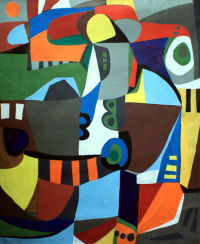