San Francisco progressive rockers Accolade are ready to release their second album, Legends, and their track, “The Lady of Shallot - Part the Second,” off the new album, will be featured on WiFi PR Group’s Indie Anthems Vol. 4.

Las Vegas, NV -- (SBWIRE) -- 01/13/2014 -- Accolade is a fresh take on progressive rock not often found, particularly in their hometown of San Francisco, Calif. Armed with a new drummer and new inspiration, they are ready to release their second album, Legends (2013), and their track, “The Lady of Shallot - Part the Second,” off the new album, will be featured on WiFi PR Group’s Indie Anthems Vol. 4.

Stefanie Reneé’s voice is hauntingly beautiful with unique coloratura soprano vocals that reflect her classical training background, and she also contributes on recorder, zills and tambourine. Multi-instrumentalist Aaron Goldstein builds the foundation for Reneé’s voice by performing on a myriad of instruments: acoustic and electric guitars, bass guitar, keyboards, organ, mandolin and samples, and on their debut album, Festivalia (2012), he contributed all of the drum and percussion parts as well. In April 2012, Accolade happily welcomed drummer and percussionist Cade Burkhammer, who also did the cover art for Festivalia. On Festivalia, you can also hear the contributions of Sean Henry on keyboards.

Accolade is often compared to such artists as Dead Can Dance, Miranda Sex Garden and Kristen Lawrence, all of whom are musical influences for them. Others inspirations are Renaissance, a 70s progressive rock band who they cover on Festivalia with the tune “Black Flame,” Cocteau Twins, Loreena McKennitt, Muse, The Cure, Delerium and more.

With their sophomore album—a vinyl and digital only release—Accolade takes their dark, ethereal breed of music in a different direction from their debut’s carnival and circus feel. With this latest album, they have been inspired by progressive rock bands of the 60s and 70s, and they aim to demonstrate their breadth of talent and ability to create new and distinct music that stands on its own in San Francisco’s crowded music scene.

While Festivalia had gypsy and circus themes carried throughout, Legends was inspired by the group’s visit to the Chalice Well in Glastonbury, England, which they deem to be one of the most magical places in the world. As Reneé is a devoted fan of the Renaissance and Medieval times, the well’s rich history of Arthurian legend and pagan traditions touched the group, and they were thus inspired to compose songs focused on the divine feminine, such as in their strong, 12-minute song, “The Journey.”

The album’s pièce de résistance is “The Lady of Shallot,” which they describe as a 21-minute progressive rock epic written to the famous poem by Alfred, Lord Tennyson. The piece is written in four separate parts and uses diverse instrumentation such as harpsichord, piano, hand drums, recorder and mandolin. The poem is long and filled with vivid, lyrical passages. You’ll hear touches of Reneé’s classical background in the melodies and counterpoint of this piece as well as its powerful yet angelic vocals. “The Lady of Shallot” takes up the entire second side of the Legends vinyl.

“The Lady of Shallot – Part the Second” will be featured on the indie compilation Indie Anthems Vol. 4 from WiFi PR Group, which is set to be released at SXSW in March 2014. This exposure is well-deserved and will introduce the compilation’s listeners to music they may not have imagined before.

You can find Accolade’s music online at CD Baby, Amazon, iTunes, House Shinto, Spotify, Rhapsody and their YouTube profile. Also check out a video of their live performance of “Elf King” at Lo-Fi Performance Gallery in Seattle, WA. 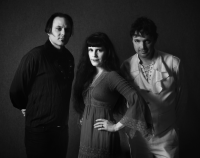