Across Great Divides: Compelling Novel Depicts Upheavals of War, Power of Family and the Resilience of Human Spirit.

Written by Monique Roy and based on the experiences of her own family, ‘Across Great Divides’ thrusts readers deep into 1933 Germany and into the thick of the Nazi regime. However, when one Jewish family flees Germany and arrives in South Africa, their adversity is far from over as apartheid grips their new home. With such pertinence to society, the novel is poised to resonate with readers around the world.

Dallas, TX -- (SBWIRE) -- 09/03/2013 -- Hitler’s rise to power in the early 1930s changed the course of world history forever and for the worse. However, as thousands of Jews fled Germany in any effort to save their own lives, a pivotal new book depicts the further racial hardships they were forced to endure in their new home nations.

‘Across Great Divides’ fuses fiction with the real-world experiences of author Monique Roy’s own family. So much more than a novel, the book’s insightful narrative showcases the lengths humans will go to in order to keep their family together, safe and free.

Across Great Divides is a timeless story of the upheavals of war, the power of family, and the resiliency of human spirit. When Hitler came to power in 1933, one Jewish family refused to be destroyed and defied the Nazis only to come up against another struggle—confronting apartheid in South Africa.

Sixteen-year-old Eva and her twin sister, Inge, witness their lives in Berlin change before their eyes. Their best friend, Trudy, betrays them when she becomes a member of the Hitler Youth. A valuable family heirloom, a beautiful emerald and diamond pendant necklace, is confiscated by the Nazis as they continue to harass Jewish families and businesses.

Their younger brother, Max, a member of the underground resistance, sees even greater danger ahead. Their father, Oskar, a diamond merchant with a thriving business, refuses to leave his beloved Germany and believes Hitler will eventually fail. Their mother, Helene, the elegant matriarch of the family, holds her family together.

The family is conflicted whether they should leave home. But after the devastation of Kristallnacht in 1938, they finally flee Germany with the help of the underground resistance after hiding many diamonds. They seek refuge in Antwerp, but war follows them as Belgium is occupied by the Germans.

A young German man, a nun, a countess conspiring against the Nazis, and a winegrower secretly hiding Jewish children, help them to escape Europe. They hike over the Pyrenees Mountains while eluding German patrols and Spanish informers. Then, they spend agonizing days on a ship bound for Rio de Janeiro that is targeted by a German U-boat. As Rio’s diamond business is corrupt, they decide to go to South Africa, another diamond market.

In Cape Town, Eva encounters an impoverished colored woman, Zoe, who is in need of work. The family hires Zoe as their maid and shields her and her daughter, Zola, from the dangers they face in the slums of District Six and from the horrors of apartheid, which are all too reminiscent of Nazi Germany. But, when Max gets into trouble with the South African police over his participation in an anti-apartheid march, will he be subject to imprisonment?

In a thrilling conclusion, the family comes to terms with the evils of society, both in their memories and current situation in South Africa.

As the author explains, the book touches on many themes that have a deeply-personal collection.

“My novel reveals the upheavals of war, power of family and resiliency of the human spirit. Throughout the story, I shed light on my family’s experiences. The book shows the historical realism of World War II and its effects, together with the human drama of moving across borders and seas, all to keep a family safe and intact,” says Roy.

Continuing, “It connects two of the 20th Century's great travesties: the Nazi occupation of Europe and the system called Apartheid in South Africa. But it is also a hopeful and moving story about one family's survival against all odds.”

Since its release in July, the book has garnered a consistent string of rave reviews.

“I was born in South Africa and I'm also Jewish so this book was extra special for me to read! Monique has done a wonderful job at taking you to this time and detailing what life was like in Germany, Rio and South Africa – all with plenty of historical detail and accuracy,” says one reader, reviewing the book on Amazon.

Michael was equally as impressed, adding, “A great novel that has a good pace and much enlightenment of these two oppressive systems with the added context of a family forced into unwanted situations.”

With the book’s popularity rapidly increasing, interested readers are urged to purchase their copies as soon as possible.

About Monique Roy
Monique loves writing that twitches her smiling muscles or transports her to another time or place. Her passion for writing began as a young girl while penning stories in a journal. Now she looks forward to deepening her passion by creating many unique stories that do nothing less than intrigue her readers.

Monique holds a degree in journalism from Southern Methodist University in Dallas and is the author of a middle-grade book Once Upon a Time in Venice. Monique loves to travel, watch movies, play tennis, pursue her passion for writing, and read historical fiction. In 2008, she was chosen by the American Jewish Committee's ACCESS program to travel to Berlin, Germany, on the 70th anniversary of Kristallnacht, to explore German and Israeli relations along with 20 other Jewish professionals from across the U.S.

Monique was born in Cape Town, South Africa, and her grandparents were European Jews who fled their home as Hitler rose to power. It’s their story that inspired her to write Across Great Divides. 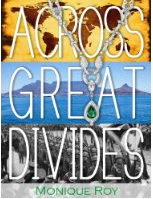