New York, NY -- (SBWIRE) -- 10/23/2014 -- “The Spike” is the story of retired MMA fighter, Manny “The Spike” Freidman having to work as a cab driver to earn a living in NYC. Brad Jacobowitz is now looking to raise funds via Kickstarter to complete this upcoming movie.

Born to a police officer father and a school teacher mother, Brad started training under Dory Funk Jr. after high school to start his career as a pro wrestler. In his five year long wrestling career, Brad worked for Full Impact Pro, SCW Florida, Florida Championship Wrestling and NWA New England, under the name Manny Montana. However, his career as a wrestler was short lived due to a series of injuries.

After the untimely end of his promising career as a wrestler, Jacobowitz decided to pursue a career in films. He has already appeared as an extra on several films and television shows. Today, Brad owns a film production company called Hard Living Productions. In 2013, Brad’s first film “The Pizza Boy” was released and received good reviews.

“The Spike” is Brad’s second filmmaking venture and it’s currently in the pre-production stage. Brad started writing the project ten years ago, and this film was the primary reason for him pursuing a career in the film industry.

Revealing plans for his new movie, Brad says, “The goal is to produce a major indie film. Whether that actually happens is another story but I’m going to try my best to make it happen. There are many deals for people who help fund the movie. Some of these even include acting roles in the film. I will make sure everyone who has a part in the film pulls off the best performance possible.”

This project’s funding goal of $100,000 must be raised before it comes to an end on November 15th. 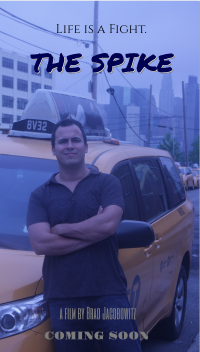