Barry engages Milana in a wide-ranging discussion of Creativity, Activism, Passion, and Comedy.

Phoenix, AZ -- (SBWIRE) -- 02/21/2019 -- VoiceAmerica, the leader in online media broadcasting and the largest producer and distributor of live internet talk radio, today announced the upcoming interview with Barry Shore and Tashkent's very own Milana Vayntrub. The episode which will play live on VoiceAmerica.com on Tuesday, February 19th and found here, VoiceAmerica at https://www.voiceamerica.com/show/3826 , www.BarryShore.com and www.VoiceAmerica.com.

Barry Shore, The Ambassador of JOY, interviews a dynamic millennial actress, comedian, and activist who is an outspoken bountiful being of happiness and love. Her name is Milana Vayntrub. She is a social media phenomenon who easily and effectively embraces the various channels to promote an awareness of the common humanity of all people. She was born in a foreign country, grew up in the heart of Southern California and leveraged her bright, articulate personality to become the face of one of the most iconic brands in the world, AT&T. Tune in. Be Turned On. And get ready to be AMAZED!

Barry Shore commented "I am enthralled at what Milana has accomplished as a talented and creative person. Our audience will enjoy meeting Milana, learning more about her story, and what aspirations she has for the future."

About Milana Vayntrub
Milana Vayntrub, Adweek Creative 100 and #Can'tDoNothing co-founder, shares her message of hope, opportunity, and global responsibility, challenging others to make the world a better place.

Many know her as saleswoman Lily Adams in AT&T's popular series of commercials or as Sloan from This Is Us, but it is Milana's compelling story as an ex-refugee and advocate for combatting the global refugee crisis that is truly capturing the world's attention. At the age of two, she fled religious persecution in Uzbekistan with her parents to make a home in America. 25 years later, she co-founded the grassroots #CantDoNothing organization, created to encourage others to give their time, money, and voice to assist refugees worldwide.

An "Upright Citizens Brigade"-trained comedian, Milana has appeared on TV and the big screen, including on Showtime's House of Lies and HBO's Californication, and in Ghostbusters and Life Happens. She will also play the role of Squirrel Girl in the Marvel's 2018 series, New Warriors, on Free Form.

In 2016, Milana was named among the top 100 thinkers, makers, and doers in marketing and media by Adweek, which described her as a "creative force for good." She now brings that force to audiences as she shares her inspiring journey to becoming a self-made artist and activist. Charismatic, funny, and illuminating on stage, she encourages audiences to become active citizens, discover the issues important to them, and realize the power that one person has to change the world.

Barry is also the Founder of the MOL (Minute of Love) Podcast and his show The JOY of LIVING can also be heard on iHeartRadio. With intensive therapy he has become an avid swimmer (2 miles per day, 6 times per week) and has accumulated enough miles over 9 years to swim from his home in Venice, California to Shanghai, China. Listen to live and on-demand episods of the show on VoiceAmerica at https://www.voiceamerica.com/show/3826 . 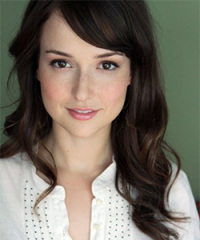