Eminence: Xander's Tales is a card collecting role playing adventure which takes place in a world where fantasy and science collide.

London, UK -- (SBWIRE) -- 09/05/2014 -- What happens when you combine a collectible card game with an MMO environment and an RPG dialogue? A brand new trading card role playing game re-imagined for smart phones, tablets and PC/Mac platforms.

The game features a unique card battle system inspired by the mechanics of card games such as Triple Triad.

Gamers are pitted against each other in a high risk card game where the winner can take the loser's card gaining them valuable resources with every victory. Conversely, the loser is substantially weakened in the process making their next move in the game critical to surviving and hopefully thriving as more turns pass.

Some of Eminence's features include:

- Card Collecting: Players will be able to collect hundreds of beautifully designed cards drawn by award winning designers that can be traded away or used to unlock exclusive cards from story based quests.
- Card Stealing: Players can build their card collection through deceit and/or conquest.
- Evolving Story: Players are immersed in an ever-evolving storyline. Players can take on new quests and discover new tales which unfold as a component of the over arcing story.
- Exploration & MMO: Gamers get to explore a real time virtual world where they can meet with real people in real time and journey across a continuously expanding environment and story.
- Character Creation: Character customization lets players choose from a wide variety of different looks and hairstyles. Upgrades can transform a player from ordinary to unique making them stand out in any crowd.
- Multiplayer Action: Players can get involved with ongoing events and tournaments offering rare cards, exclusive armor and gear, prizes and bragging rights if they win.
- Unique Guild System: Gamers can join forces with other heroes and build a team to battle cooperatively against other teams..

This crowdfunding campaign ends on October 7, 2014. 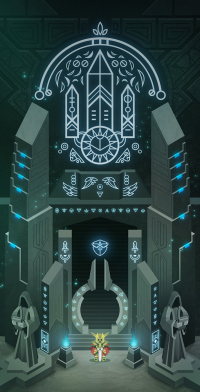 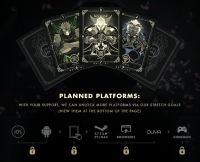