From author Lawrence A. Votee, ‘Aeternum’ Books One & Two explore the life of hero Lucian Solis, an ordinary teenager who discovers a painful secret. As his life spirals out of control, Lucian is faced with saving the one he loves most, and confronting the evils of his past.

Niagara Falls, NY -- (SBWIRE) -- 02/26/2014 -- It’s a fact: many teenagers spend their time hoping that something extraordinary will happen to them to lift them from their seemingly boring and mundane lives. But as Lucian Solis, the main character in dazzling new sci-fi duo, ‘Aeternum’ finds out, being ordinary is often a blessing in disguise.

Solis, who feels he is about as average as they come, discovers a terrifying truth on the eve of his high school graduation. He is not a human being.

Instead, Solis learns that he is a legendary alien warrior who was betrayed by his father and brothers and framed for the murder of his family members. With this revealed, Solis also finds out that his Eternal has been taken prisoner by his enemies.

As confusion mounts and Solis re-discovers his true identity, the battle between good and evil commences in an exciting and adventurous duo of books by author Lawrence A. Votee.

“I think people will see themselves in Lucian,” says Votee. “He will go to the ends of the earth – and beyond – to save the one he loves most. When he embarks on his journey, he doesn’t know if he’ll return, but he’s willing to try because he believes in doing the right thing. While he’s a classic hero, he’s also re-learning how to be courageous and how to win in battle. It was thrilling to write that transformation.”

Prepare yourself for an amazing journey.

Aeternum: Book One is the story of Lucian Solis-a seemingly ordinary teenager. On the eve of his high school graduation an impossible and painful secret is revealed to him. He is not who he thinks he is. He is not from this place. He is not human.

With the help of the man who raised him, his two closest friends, and a beautiful and mysterious stranger, Lucian must become who he once was in order to rescue his Eternal. That which he loves most has been taken prisoner by his evil father and brothers and he will stop at nothing to get her back.

Aeternum: Book Two brings our warrior home to face those responsible for killing his family, branding him a traitor, and imprisoning that which he loves most. Will he succeed in his vengeful quest? Will he rescue his Eternal? Or will all be lost?

Since its publication, the ‘Aeternum’ series has enjoyed glowing reviews from readers.

Calling the books “exceptional”, Monica wrote: “Saying I loved this book is completely an understatement because both books have been the best books I have ever read.”

“I feel like this story is one of those 'hidden gems' that are hard to come across but are definitely worth the wait in finding. The writing itself flows very nicely, perfectly structured and with a captivating but smooth tone from start to finish,” wrote Lucidity.

“I enjoyed Lawrence Votee's `Aeternum'--it quickly gets to the delicious meat of things, and it holds you enthralled for its clever writing. You obviously get a sense of the author's masterful command of language--he knows how to push readers' buttons and reward them with the kind of satisfaction you get only from a well-crafted story,” wrote Meghan.

The author lives in New York. 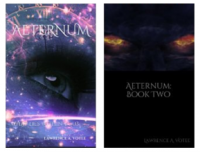