New York, NY -- (SBWIRE) -- 01/14/2014 -- Author/Screenwriter, Karen R. Hardin, has backtracked on her career to make an official release of her first novel “Loyalty” to celebrate bravery and healing.

“Is it controversial, or a great story?”

“Will it be my stigma or my writing?”

…these are the two questions Karen has struggled with since she first released “Loyalty”. During her battle with depression she was talked out of fully promoting or producing the novel as a film when an Italian manager in Los Angeles asked, “What does a black woman from the south know about writing a mob story?” After Urban Book Reviews later gave “Loyalty” a perfect 10 and compared her work to “The Godfather”, “Scarface” and “Goodfellas”, Karen continued to use the novel as a calling card and went on to pen several screenplays. With this official release announcement, she is further challenging herself out of depression with more exposure of her work.

About the Author: Karen R. Hardin
Something like a divine goddess scribe, Karen R. Hardin has been hailed as a creative genius and one of the most prolific minds of our time. With an imagination that developed from the sheer need to escape childhood abuse, her cultivation of vivid storytelling developed as a second nature.

With ease of flow she's turned out multiple novels and screenplays for indie film producers. One such script was written in a 24 hour period and helped to initiate the start of Derrty Entertainment's spinoff company UCME Films. 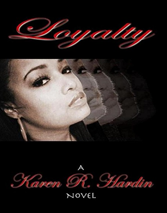