Telling the compelling tale of four teens and the challenges they face while on a quest to find a new home, Robert Butler’s latest book is poised to engage and inspire young readers; while proving to adults that modern-day children can still survive in the ‘real’ world.

Paragould, AR -- (SBWIRE) -- 11/12/2012 -- While many believe young people are concerned with only video games and technology, author Robert Butler proves that they are more than capable of surviving alone in the face of adversity. In fact, if the characters of his latest young person’s novel are anything to go by – teenagers possess skills that more than rival their older counterparts.

‘After the Snow Began to Fall’ takes young readers on a journey that revels with surprises.

Synopsis
“After the Snow Began to Fall is a novel that will make you laugh, cry, sit on the edge of your seat at times, and present you with questions (maybe even a few answers) that have challenged each of us during our lifetimes. The world in which these characters live is much different than that which we face, but their approach to living should be an inspiration to all.

They must make do with less and become innovative when it counts. Life and death decisions are intertwined with humor and romance. Without anyone else to come to their aid, they struggle to survive and create a new life for themselves and those who join them along the way. In addition, this novel is rather unique, I think, because it is actually two novels in one. One of the characters is a writer who creates a novel for the other characters as the story proceeds.”

As the author explains, he hopes the book frames young people in the best possible light.

“It demonstrates that teens today are not unskilled, game and electronics crazy teenagers. They can and will survive if faced with circumstances that demand them to be mature and resourceful,” says Butler, who has a wealth of other books to his name.

Continuing, “My hope is that this subject matter not only inspires young people, but proves to their parents and other adults that teenagers’ imaginations stretch far beyond the television screen.”

To achieve his goal, aside from refraining from including severe violence or sexual references, Butler worked diligently to ensure that his characters were as a vivid and life-like as possible.

“I have tried to make the characters real people with whom we can share their joys and sorrows. Their journey is a challenging adventure, though it often presents them with choices between life and death,” he adds.

In short, this engaging and powerful novel is poised to have readers laughing, crying and even applauding at the ingenuity of its protagonists.

‘After the Snow Began to Fall’, published by Lulu, is available in the following formats:

About Robert Butler
Robert Butler spent twelve years as a high school English teacher but has had several “careers,” including six years as an accountant (his college diploma was in business, majoring in accounting), six years as a night security officer in Memphis, TN, a food service manager in both fast food and college food services, and a variety of odd jobs, including going to Granby, Colorado for five months to work in conference services at Snow Mountain Ranch, the YMCA of the Rockies, spending a year in Cedar Rapids, Iowa with AmeriCorps VISTA, working about two years at the Arkansas State University Convocation Center, and working for six months at Signal Mountain Lodge in the Grand Teton National Park in Wyoming. He currently lives and writes in Paragould, Arkansas or somewhere thereabouts. 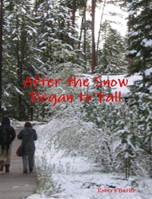