Chaska, MN -- (SBWIRE) -- 09/28/2011 -- Many areas of the country are troubled by air pollution, but it is often believed that inside the home, the air tends to be healthy and clean. Unfortunately, this is not always the case.

Research has shown that the air inside homes can actually be quite damaging to health, especially in the case of someone who already has a breathing issue like asthma. From mold and bacteria to particulates and gases including carbon monoxide, indoor air pollution is a serious health issue. According to the California Air Resources Board, long-term exposure to air pollution can shorten a person’s life expectancy by 10 years.

An indoor air purifier has received a lot of attention lately for its incredible filtration system and ability to trap even the tiniest of particles. IQAir HealthPro Plus, which is sold by Air Purifiers USA, is the only air purifier with HyperHEPA® filter technology, which has been proven in rigorous independent testing to effectively trap the tiny particles.

“Tiny airborne ultrafine particles are the most harmful because they penetrate the most deeply into the lungs and bloodstream,” explained company spokesperson Barry Midwinter.

Studies have found that the ultrafine particles, which by definition are smaller than 0.1 microns, represent more than 90 percent of airborne pollution, thus the need for a filter like the HealthPro Plus that can handle these super tiny particles.

“IQAir is the first and only home air purifier proven to filter ultrafine particles all the way down to 0.003 microns - the smallest particles that exist,” Midwinter explained. “These are 100 times smaller than what ordinary HEPA filters can stop.”

While it is not uncommon for residences and businesses to have indoor air purifiers, many are simply not doing an adequate job. Ordinary air purifiers may remove only 5 to 10 percent of indoor air pollutants because they are missing the ultrafine particles. The HealthPro Plus Air Purifier, on the other hand, removes more than 99.5 percent of the pollutants in the air. Clearly, the wrong choice in an air purifier can have serious health consequences.

According to the company’s website, the HealthPro Plus is IQAir’s best-selling room air purifier. It is suited for home use, as well as businesses and other establishments that are known for having high levels of contaminants in the air, such as beauty and nail salons, schools, and art studios.

For more information on the IQAir Health Pro Plus, please visit http://www.air-purifiers-usa.biz/iqairhealthproplus.php 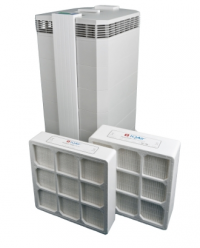