As fall and winter set in across the country, millions of families will spend even more time indoors at the mercy of major allergy triggers that create definitive health hazards. The EPA and its Science Advisory Board have consistently ranked indoor air pollution among the top five environmental risks to public health. Studies have shown that airborne pollutants may be 25 to 100 times higher indoors than outdoors.

It is not only allergy and asthma victims that suffer. The mold, dust mites, pet dander, volatile organic compounds in household chemicals and even wood flooring and paint are having a deleterious effect on all indoor inhabitants .In fact, the American College of Allergists says that 50 percent of all illnesses are caused or aggravated by polluted indoor air.

While air purifiers generally help, many lack true HEPA particulate filtration and sufficient stores of an activated carbon filter for the best indoor air quality. The Austin Air Healthmate air purifier combines proven filter technology that is designed to address the complete spectrum of air contaminates such as sub-micron particles, noxious gases and chemicals. The Austin Air Healthmate incorporates True Medical Grade HEPA with 99.97 percent efficiency down to 0.3 microns and 95 percent efficiency down to 0.1 microns.

Austin Air Healthmate air purifiers incorporate a 360-degree intake system to draw air into all sides, passing it through a four-stage filter that provides highly effective particle removal in a 1,500 square foot area. Every minute, over 250 cubic feet of air passes through 15 pounds of Activated Carbon/Zeolite Blend and over 60 square feet of True Medical Grade HEPA.

The result is removal of seen particles such as dust, hair and pet dander as well as small particles such as molds, spores and pollen chemicals in the first two filtration stages. Then the second two stages remove gases and odors such as sulfuric acid and ammonia as well as harmful micro-organisms such as bacteria and viruses. The result is significantly cleaner air that greatly improves health and sleep.

Equipped with a powerful centrifugal fan with three-speed control, the units come with a 30-day no-questions-asked money-back guarantee and five-year mechanical and pro-rated filter warranties. To learn more about the Austin Air Healthmate, please visit http://www.austinairpurifiersusa.com/austinairhealthmate/ 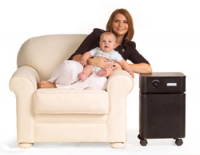