Alek Sandar - The First Bulgarian Artist with a VEVO Channel

Berlin, Germany -- (SBWIRE) -- 01/23/2014 -- Having an inspiring and motivational year filled with international performances and many multinational music projects, Alek Sandar has finished work on his debut EP “Meteors". The mini-album will be released digitally globally on January 31st. The “Meteors" EP features five compositions written by Alek and was produced by the Manhattan-based producer crew Boyplay. The EP includes award-winning hits “It Ain’t Over" and “You and Me" with Bulgarian icon Dess (a.k.a. Desislava) and a duet with Balkan pop sensation Andrea.

The impressive video of the pilot song “Say That You Love Me” was shot in Manhattan, New York City, and features international top model Shari from Red Models. "I was very excited to have Shari in the video. She flew in all the way from Paris to make out with me," Alek jokes. By shooting in locations such as the world famous Plaza Hotel on Fifth Avenue or a Parkview Developers Penthouse with breathtaking views on Central Park South, Alek Sandar proves that independent artists can also record on locations that are usually exclusive only to multi-million-dollar Hollywood productions. “Sometimes you should dream big, as most things are possible, especially if you are surrounded by the right team of enthusiasts and people who believe in your magic." The multitalented young musician co-directed and produced the video himself.

Please check out Alek Sandar’s latest music video “Say That You Love Me” at VEVO or YouTube channel. 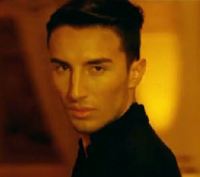