Octaloofah is a revolutionary device designed to help people to gain relaxation during their shower time. Now launch their kickstarter campaign to achieve their funding goals.

Walnut Creek, CA -- (SBWIRE) -- 05/10/2016 -- Alex King the founder of Octaloofah launches new Kickstarter campaign recently, offering new opportunities for backers to join the community and take part in the next promising product in the market. Since the first time the page being launched to the public via Kickstarter, it gained hundreds of hits from interested fellows about the project. Within couple days, at least 27 backers have shown their intention by contributing financially to the project. From the initial goal of $25,000 funding, he managed to collect nearly $1,500 so far. There are still many days left until the deadline so that the possibilities are so broad for Alex King to be able to reach the desired amount of funding at Kickstarter.

As it described on founder Kickstarter page, Octaloofah is a revolutionary device designed to help people to gain relaxation and to be relieved at the same time, during their shower time. The daily shower won't be same anymore with Octaloofah, where people can use it to give massages to any difficult spots on their body anyone might have problems to massage it themselves, such as the back part of the body. As the name has said all, Octaloofah has eight parts or arms to help provide relaxing massages while at the same time to cleanse the body during the shower.

"Aside from its main function as a self-massaging device, Octaloofah is also equipped with various great features to bring new showering experience to its owner, such as allowing the user to listen to music from their phone playlist, providing an extra storage compartment for shower necessities such as soaps, brushes, shampoo, and many more." Alex King founder said.

It can be easily mounted and dismounted from the wall and has automated system of exfoliating for easier usage. The device can easily to install and dismount, just as featured on CNet.

About Octaloofah
Alex King, the founder of the Octaloofah have carefully designed the product to be fully functioning and is suitable for both men and women. Octaloofah is on Kickstarter to start its crowdfunding campaign so anyone can easily take a part of the project. There are multiple stages of backing up plans are available so one can choose one that suit their excitement level. It's sure that rewards are granted by Alex King only for dedicated backers out there. The level of rewards will be given based on their contribution to the project. The more they contributed to it, the higher reward it will be given to the backer.

For more information please visit their kickstarter page at https://www.kickstarter.com/projects/1222093645/the-octaloofah-changing-the-way-we-shower-forever?ref=category_location 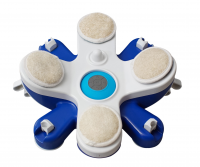