Masterfully crafted by Lindsey Forrest, ‘All Who Are Lost’ is an intricate and ultimately uplifting story that brings unlikely lovers back together as they finally realize where their hearts lie. Both have suffered great loss, some of it caused directly by their own foolish life-changing actions but, as Forrest’s narrative makes clear, nobody is unredeemable to life’s most powerful force.

Plano, TX -- (SBWIRE) -- 10/30/2014 -- While most authors use their debut novel to do nothing but simply test the literary waters, Lindsey Forrest is quickly proving that a first release is also an opportunity to rival a genre’s best-sellers. Forrest is bucking romance genre trends with gusto, presenting an intricate and thought-provoking narrative that examines love’s powerful influence over grief.

‘All Who Are Lost’ forms part one of the ‘Ashmore’s Folly’ series, a deeply-researched literary project that sees its three planned novels accompanied by online research notes, extended character profiles, and even a Spotify playlist that adds an engrossing opportunity to do far more than simply read the books. Volume one sets the scene as two tragedy-scorned soul mates find themselves back on each other’s radars – but is it for the right reasons?

One man.
Too many betrayals.
Three women.
One last chance.

On a cold winter day, a woman calls a number halfway across the world.
A man answers.

What do you do
when the love of your life
is the last person you should love?

A great family estate in Virginia.

Three sisters growing up in the shadow of their father’s obsessive drive to recapture his lost muse, the woman he threw into the cold Irish sea.

The scion of an old family, falling in love with the wrong sister, blind to the ice at her core.

A woman haunted by a moment of blood and violence, when she reached out and took a man who didn’t belong to her.

A man living a life of regret and sacrifice, given a last chance to claim the woman he should have loved all along.

But all that is past is not over. And when three sisters go to war over a man who sees only the wrong woman, three families become casualties, and love becomes a battlefield.

“Both of our lovers are left to pick up the pieces after great loss. His great mistake stains and blights his life, as he struggles knowing that he betrayed the woman he swore to cherish and ended up driving two young women from their home. He lives with the knowledge that he is not the man he wants to be. Her guilt is even more gut-wrenching as the loss was at her hands, leaving a lifetime of torture as she struggles to go on after lashing out on a lover during a moment she can never get back. Can they forgive themselves enough so that they can eventually forgive each other and those who have hurt them?” asks Forrest. “He has lost his honor and she has lost her soul -- a combination of weaknesses that has left each one unable to go on for over a decade, unable to find fulfillment and happiness in their private lives, even as each thrives in the eyes of the world.”

Continuing, “They are forced to rebuild a new world around them and they eventually find the last love of their lives. The message I want readers to take away is that no one is irretrievable, no one is unredeemable, and that you can survive even the worst losses. You can always build again.”

Early feedback has been impressive to say the least. One Amazon reader comments, “This is a long book, over 500 pages but it was so hard to put down that I read it in a short period of time because I kept wanting to see what happened next. I loved this book. Yes there is plenty of romance but in addition are many underlying story lines that come to light throughout the book which brings in the elements of mystery and suspense. The author also does an incredible job of developing the characters and bringing them to life.”

Another reader adds, “Great story! This is an absolute "can't put it down" book!”

Still another reader said, “This book is a great find! Lindsey Forrest writes romance in the broadest sense - her novel is full of yearning and anguish, remorse and hope, and an unremitting search for redemption. Peppered with humor, a little mystery, and some surprising twists, All Who are Lost is not just a typical ‘love"’ story, although love and hate drive it all the way through to the cliff-hanger conclusion.”

The author is already back at the writing table, with volume two due for release next year.

“‘All That Lies Broken’ will be released in the second quarter of 2015 and ‘All That Burns the Dark’ in the fall. But the saga doesn’t end with the books. The Ashmore’s Folly website offers a world of further reading opportunities as this becomes a long-term project rather than just a trilogy. Readers can spend dozens of hours learning more about their favorite characters, diving into my research surrounding the Virginia settings and also downloading playlists that bring the story to life. There’s plenty more to come!” Forrest adds. “Future plans include family trees of the three families – the Ashmores, the St. Brides, and the Abbotts, and a presentation on the Virginia architecture that plays a major role in the trilogy.”

In the meantime, ‘All Who Are Lost (Ashmore's Folly) (Volume 1)´ is available now: http://amzn.to/1wvNqIn.

About Lindsey Forrest
Lindsey Forrest, a lead writer/editor for an international information company, writes about income tax but prefers to dream of heroes and heroines and grand romance. With the publication of her trilogy, she checks off the top entry on her bucket list. She lives in north Texas with her family and cat and has a five-year plan for becoming a full-time novelist and editor of indie fiction. When she isn't working or writing, she amuses herself with reading, needlepointing, tramping around historical sites and houses, and outbidding everyone who gets in her way on Ebay. 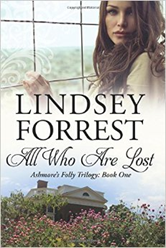