French Laundry Restaurant Inducted Into the Culinary Hall of Fame

About French Laundry Restaurant
Few restaurants in the United States have won the accolades and stars that have been bestowed on the French Laundry in California's Napa Valley. The same holds true for its chef/proprietor Thomas Keller, who has won almost every culinary award given.

It was not always like that. Once upon a time, a young Chef Keller, still recovering from a failed restaurant in New York City found himself in Yountville, California. He found a building that had once had been a bordello, and then a French steam laundry. Thomas Keller aptly called it the “French Laundry” and opened its doors in 1994. Its was the beginning of what forever transformed the United States Food scene. Almost two decades later, there is still a two-month wait for a table. WikiHow.com even post tips on “How to get French Laundry Reservations.”

The French Laundry is a perennial awardee in the annual Restaurant Magazine list of the Top 50 Restaurants of the World (having been named "Best Restaurant in the World" in 2003 and 2004), and since 2006, it has been awarded three stars in the Michelin Guide to San Francisco. It has also been favorably reviewed by The New York Times and called "the best restaurant in the world, period" by Anthony Bourdain.

Every day, the French Laundry serves two different nine-course tasting menus, none of which uses the same ingredient more than once.

About Culinary Hall of Fame
Our mission is to present a single, unified Hall of Fame to encompass all things culinary. Our hall of fame includes restaurants, writers of books and magazines, television shows, chefs and food stylists, popular recipes, pioneers and visionaries in the areas from organic farming to going green or fighting obesity. For more information, please refer to our mission statement or contact form at: 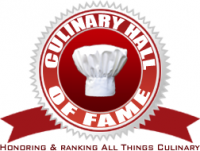 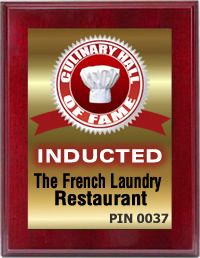