Stamford, CT -- (SBWIRE) -- 11/17/2014 -- Voting can be so frustrating. Everyone votes in a candidate who seems to listen to the people and then, once in office, the candidate rarely seems to vote on issues the way the people who put them in there have desired. A team from Stamford, Connecticut are creating an iOS app– GET DEMOCRACY – that they believe will bring transparency to the political process and they have launched a Kickstarter campaign to fund the process of making and distributing it.

The Get Democracy team wants to make a difference by radically enhancing transparency in government and making elected officials accountable to voters. The Get Democracy app leverages technology in order to give voters a tool to let their voice be heard. They're making politics easier, more straightforward and more productive for the individual citizen.

It was the voters that put elected officials in office and they are paid through voter's taxes. Now voters can hold them accountable.

Backers helping fund the Get Democracy Project campaign to the next level will be eligible for perks such as thank yous, access to Get Democracy, stress reliever balls, t-shirts, limited edition autographed and numbered iOS app prints and much, much more.

For more information, visit GET DEMOCRACY 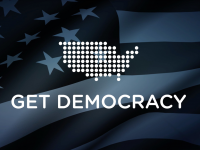