AMERICAN WARRIOR WHISKEY is a veteran owned spirits and retail company dedicated to connecting people through the inspiring stories of those that fought for America’s freedom. The company has just started a crowdfunding campaign via FundThis to introduce their initial line of whiskeys.

Nashville, TN -- (SBWIRE) -- 03/23/2017 -- An upcoming spirits brand with a difference, American Warrior Whiskey is committed to promoting America's war veterans and supporting those suffering from Post Traumatic Stress Disorder (PTSD). Each bottle of whiskey manufactured by this veteran owned spirits company will feature a tribute sharing the stories of selfless service of America's war heroes.

Founder of AMERICAN WARRIOR WHISKEY Keith Marshall is an Air Force veteran. Marshall and most of his family members have served the military and their Country with distinction. Representing veterans from all five branches of the military, the brand will be an extension of US military families bringing together the old and the new.

The AWW team strongly believes that premier medical care should be a benefit for all veterans. 20% of the profit on each and every bottle of AWW sold will be donated to Post Traumatic Stress Disorder (PTSD) support programs and research. By funding programs and research activities related to PTSD, the company looks forward to developing a superior support system for veterans suffering from this psychological casualty of war.

American Warrior Whiskey will produce all their products in America. Their initial line of whiskeys will feature unique small batch, oak barrel aged bourbon and their premium all natural white corn Moonshine. These premium spirits will be sold in the company's retail shop along with a line of unique cocktail mixers. After the launch of their first two lines, American Warrior Whiskey will launch an e-commerce platform, offering whiskey connoisseurs the liberty to purchase the AWW products online.

To produce their initial line of spirits, American Warrior Whiskey has already partnered with two of the finest craft distillers in the US. All spirits manufactured by them will follow the company's specific recipes, raw product specifications, and distilling guidelines.

Highlighting the concept of AWW, a senior spokesperson from the company said, "AWW will be more than a spirit and retail company, it will be a brand committed to an undying tribute and belief that by sharing the stories of our warriors; we can bring together generations of past and present, and fade the gap between soldiers and civilians."

American Warrior Whiskey has just started a FundThis campaign to raise funds to produce and launch their small-batch premium bourbon and moonshine. The funding goal of this campaign to get things off the ground is $30,000. But the American Warrior Whiskey vision is much bigger. If the team manages to raise $250,000 it will be able to open its first Whiskey Exchange, which would hire veterans and propel the cause to even higher levels.

To find out more about American Warrior Whiskey and their crowdfunding campaign, please visit http://bit.ly/2o5m8JX 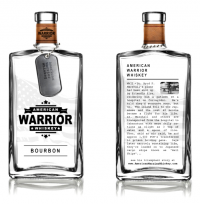