Canadian country artist, Amy Rose is releasing her new single, "I Just Want You To Know" to US Radio. Industry veteran, Alan Young has been hired to handle radio promotions.

Nashville, TN -- (SBWIRE) -- 10/18/2012 -- MTS Management Group is proud to announce the US release of "I Just Want You To Know," the new single from Canadian country artist, Amy Rose. The single has already been distributed digitally to radio stations via Airplay Access. Physical copies of the promotional CD single will also be delivered to stations before the "official" add date of November 12, 2012. Veteran radio promoter, Alan Young has been hired to handle US promotions for the single. Amy will be in Nashville to promote the new release with two shows and interviews, from November 6-9.

"'I Just Want You To Know' is the perfect showcase for Amy's powerhouse vocals," says Michael Stover of MTS Management Group, Amy's manager. "We are all so excited about this release. It is an absolute radio smash, that will build on the initial success of her video for "(Redneck Reunion)Party Like A Redneck," and put her into the same conversations people have about artists like Kelly Clarkson and Carrie Underwood."

"I Just Want You To Know" was written by Max Martin and Lukasz Gottwald, and it was originally recorded by the Backstreet Boys in 2005. It was a minor pop chart hit in the US. Amy's version was recorded in Nashville at Sony Tree Studios, with producers Glen Coulson and Marty Beecroft of After Tuesday Productions. It also features the playing of Mark Prentice, bass (Vince Gill, Keith Urban;) Glen Duncan, fiddle (Reba, Shania;) and Mike Rojas, keys (Lady Antebellum, Luke Bryan,) among others. The single is from Amy's forthcoming 2013 CD release, as yet untitled.

Alan Young is a 35-plus-year veteran of the music industry. He was the Country Music Chart Editor at Billboard Magazine from 1974-1978. He worked for Elektra Records for a brief time before becoming an independent radio promoter in 1979. Alan has promoted singles by Alabama, George Strait, Lee Greenwood, Reba McEntire, Leann Rimes and Tim McGraw. His is also responsible for the #1 single by Heartland, "I Loved Her First." (Lofton Creek)

Amy Rose is based in Barrie, Ontario, Canada, where she lives with her husband and children. She has opened shows for acts like Emerson Drive and the Wilkinsons. Amy released her first album at age 13. She is currently working on her third album. For more information on Amy Rose, visit AmyRoseMusic.com. 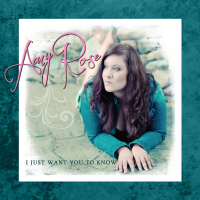