Written by Ngto?, and forming the second volume of the ‘Mark Greene Misadventures’ series, ‘An Education of Sorts’ thrusts readers deep into a community college that could be about to change the face of humanity forever. Told with his usual flair of satire and suspense, NgTo? is poised to captivate his growing audience as Mark Greene steps in to try and save the world.

Boston, MA -- (SBWIRE) -- 10/30/2013 -- While saving humankind has long been a popular literary fascination, readers are used to seeing narratives play out in the arenas of outer space and dark cavernous lairs. However, in a compelling new novel by NgTo?, a ‘normal’ community college plays host to what could be man’s ultimate downfall.

‘An Education of Sorts’ is as unique as it is entertaining.

From his last misadventure (Unethical Therapy from a Not-too-Distant Galaxy) Mark Greene, that semi-smart layabout, is back. Venturing to Bunk Bunk Community College to enroll in courses that he hopes might lead to some sort of employment, Mark inexplicably finds himself tossed into the lowest depths of the teaching profession: He’s hired as an adjunct to teach English at midnight. Try as he might to impart literature and spark creativity to those in his charge, Mark Greene cannot help but get his own schooling-- good and hard.

For Mark Greene stumbles upon a plot, in the bowels of the school’s Wellness Center, to transform the very nature of man. Mark Greene might have at one time saved Earth from an outer-space therapy of questionable efficacy; now he must use all his resources (so few, so true) to save humanity from man’s oldest and most dangerous desire: to be a god. In this Manichean contest, Mark Greene must defeat the Machiavellian president of Bunk Bunk Community College, President FiFi; a deeply cynical and bitter scientist, the Dean of Nocturnal Studies; an alcoholic, chip-on-his-shoulder politician, Rep. Pat A. Nidge; and, finally, the founder of Planet Pennies, Starbuck’s great rival. Mark, however, has one ace up his sleeve: the love of his life. Her name is Diane, a clerk at the school, enrolled at university, majoring in psychology.

Ok, more love than ally, but together they aim to save themselves and all of mankind from man’s most ancient and inveterate sin.

As the author explains, his narrative fuses a myriad of popular literary themes that will have readers examining their own college days in a whole new light.

“It’s got everything – love, murders most violent, middle-of-the-night classes, and the spectacle of faculty afloat (and drowning) in a quad of duck turd stew. If only college had been this adventurous, not to mention absurd, I might have stayed for my degree,” says NgTo?.

Continuing, “It was designed to be a real page turner with plenty of twists. You’ll come to realize that evil can be quite amusing and can prevail literally anywhere… even in a Wellness Center of a local community college.”

‘An Education of Sorts’, published by CreateSpace, is available now: http://amzn.to/1h8iGGs.

About the Author: Joel Ohren
Joel Ohren is the author (under the pen name, NgTo’) of Unethical Therapy from a Not-too- Distant Galaxy, the first in the series of the Mark Greene misadventures as well as Isaac is Born, a novella. 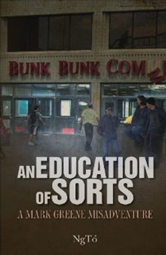