Having sold over twenty-thousand copies of ‘A Grand Murder’ and ‘A Luring Murder’, author Stacy Verdick Case dusts off detective Catherine O’Brien for yet another case. In the eagerly-awaited ‘An Intimate Murder’, readers are invited into the home of one family where tragedy is no stranger. However, only O’Brien and her partner Louise can uncover if this is bad luck or something far more sinister…

St. Paul, MN -- (SBWIRE) -- 07/07/2014 -- While most mystery and detective novels take readers into a world steeped with serious undertones and dark premise, author Stacy Verdick Case bucks the trend by infusing her murder mysteries with…well…humor! While unconventional, the formula has proven immensely successful and has seen over twenty-thousand fans flock to purchase the first two books in the Catherine O’Brien mystery series. In October of 2014, O’Brien returns with gusto to meet one family who has had more than a stroke of bad luck.

‘An Intimate Murder’ proves that, while a home may be a castle, it can quickly become the bloody playground for killers. For how long can a string of tragedies be put down to bad luck?

The Irreverent detective is back. When Jonathan and Susan Luther are murdered in their home, St. Paul homicide detective Catherine O'Brien and her partner Louise discover this isn't the first time the Luther family has been visited by tragedy. Is it a case of bad family luck or is there something more?

“This is certainly a unique style of murder mystery,” admits Stacy. “The narrative weaves humor into the drama, which is atypical of the genre, but it seems to work. It’s an fresh approach that is resonating well with readers from all backgrounds. In fact, some have even compared ‘A Grand’ Murder’ and ‘A Luring Murder’ to the works of Janet Evanovich.”

Continuing, “O’Brien seems to investigate murder wherever she goes. From dealing with death a prominent local businessman on home soil through being put in charge of a case while on vacation and in strange territory, her irreverent ways are no barrier to eventually finding the killer.”

The series’ first two novels have garnered an impressive string of five-star reviews. For example, in reference to ‘A Grand Murder’, J.L. Campbell comments, “A Grand Murder is a fast, light read, which takes the reader through a list of connected suspects whose motives are not always clear. The exchanges between the characters, along with a few mishaps, kept me amused and entertained. This isn't easy to pull off when you're dealing with not one, but two murders.”

Another reader writes, “You will find this book funny (some great one liners), an easy read (my favorite kind!) and still with the aspect of a deep murder mystery with just enough page turning action to really keep you on your toes and up late reading the next chapter, because you "just have to find out who did it!"

Reader Yvonne was equally as impressed with ‘A Luring Murder’, adding, “The mystery keeps you guessing throughout the book. The victim is not well-liked, which means there are many suspects to choose from. Even the local deputy had a reason to want this man dead. The story is filled with deception, betrayal and a stray dog that seems attached to Catherine’s husband. This isn’t how the O’Brien’s planned to spend their vacation.”

Stacy has written stories for as long as she can remember. She wrote her first book in second grade entitle No Snow on Christmas and hasn’t stopped writing since. “Other kids had a security blanket or favorite doll; I carried a red tattered notebook and pen.“

Stacy currently lives on five rolling acres of land north of St. Paul with her husband and her daughter. Her Catherine O’Brien mysteries, A Grand Murder and A Luring Murder, are available from Before the Fall Books. The third book An Intimate Murder is available October 7,2014. 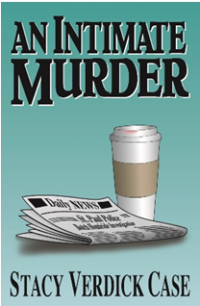