Winnipeg, Manitoba -- (SBWIRE) -- 03/05/2013 -- As technology has evolved, many of the classic games once played around the table can now be played through the portals of smartphone screens. These mobile game apps are hugely popular, and many people enjoy playing against their friends. For those who wish to get an edge on their competition, Anagrammer has the answers to almost all the most popular games. The site provides solving software for users to gain a much needed advantage at a critical time in games like Words With Friends, Boggle and Hanging With Friends.

The software works by having users enter the data they have, whether it be an anagram, a series of letters, or a series of known and unknown letters in a word, before analyzing this content and providing solutions based on the information received. It’s complex algorithm suggests results in seconds, and is completely separate to the game itself, so other players won’t be able to tell users have leveraged it’s abilities to give them an advantage.

A spokesperson for Anagrammer explained, “If you need a Hanging With Friends cheat or a Scramble With Friends cheat, Anagrammer has the solution to these and many more competitive games, using computer processing power to access far more possibilities far more quickly than the human brain. Whether you simply want to stay in the game or crush your opposition, Anagrammer can help users hold their own. The truth of it is, in games like Words With Friends, the tactics of placement are just as important to victory as simply forming the words, so we help players focus on their strategy instead of wasting resources piecing together the letters they have.”

About Anagrammer
Anagrammer is the largest word game resource on the internet. They provide fast and powerful word solving cheats for almost every word game including Scrabble, Words With Friends, Hanging With Friends, Scramble With Friends, Draw something, Letterpress, Wordfeud, Word Ace, Boggle and more. With Mr. Anagrammer's Hanging With Friends Cheat users can quickly solve the word their opponent has created by simply selecting the number of letters in the answer, inputting the known letters and clicking on the "Solve" button. As the game moves forward, users can input the confirmed letters not in the answer until they finish guessing the entire word. No more bursting balloons and lava pits for Anagrammer users. For more information, please visit: http://www.anagrammer.com/ 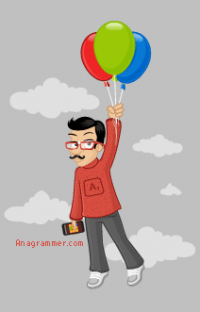