Written by a Soviet émigré and scholar of Marxism/ Leninism, ‘Anatomy of a Bolshevik’ deconstructs President Obama and answers the most troubling question - “Why?”

Houston, TX -- (SBWIRE) -- 10/10/2012 -- With November looming and the world placing a critical eye on Obama and his ‘grand plans’ for the future, a new book has emerged that could change the game for good.

‘Anatomy of a Bolshevik’, written by Soviet émigré and scholar of Marxism/ Leninism Alexander Markovsky, factually and intellectually deconstructs President Obama and answers the critical questions on the mind of every Conservative and Liberal in America.

He continues, “My new book takes a Marxist-Leninist approach to explain why the President is leading an assault on American values, the economy and our way of life. It also reveals his ultimate strategic objective and the tactics he is using to accomplish it.”

In fact, Markovsky believes that the President’s agenda is to build an egalitarian society using tactics that show all of the hallmarks of Marxist Dialectical materialism.

The author also offers an unorthodox view on some of the other compelling issues of our time, including the budget deficit, global warming, energy policy, and government spending.

“Obama’s agenda reads as if it came straight out of the University of Marxism-Leninism. It contains nothing new and strikes all of the parallels between the Russian Bolsheviks and Obama’s administration.

Both are utterly convinced of their own uncompromising righteousness and their fanatical belief in economic equality. Obsessed with power and control, the two strategies are closer than most liberals will admit,” he adds.

Markovsky’s book delves into these concepts in great depth, as well as provides what critics have called “the most accurate, predictive model of Barack Obama’s behavior” - all viewed through the prism of Marxism/ Leninism.

While the author is passionate about voters making their voices heard on November 5th, his immediate concern lies with those he loves.

“I am concerned about the future we are leaving for my daughter and for all of our grandchildren -- if we re-elect Obama. It is only by looking through the prism of my Red Communist glasses that one can understand the true nature and danger of Obama's Socialist agenda for this country,” he says.

This passion, coupled with Markovsky’s deep-rooted academic understanding, makes ‘Anatomy of a Bolshevik’ a necessary read for anyone concerned about their family, their country and the future.

The book, published by Amazon Digital Services, is available for purchase electronically in Kindle and Nook formats, as well as in paperback.

About Alexander G. Markovsky
Alexander G. Markovsky, born in the former Soviet Union, is a graduate of the University of Marxism-Leninism and holds degrees in economics, political science, and engineering from Moscow University. He lives in Houston, Texas, where he runs a consulting company specialized in management of large international projects. His essays have appeared on RedState.com.

Markovsky is available for interviews. Review copies of book upon request. 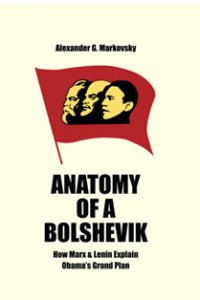