Los Angeles, CA -- (SBWIRE) -- 10/08/2014 -- Annie Duke, a prominent public speaker, and student of cognitive psychology has recently written about the ability of jurors to self-assess bias. In a Detroit courtroom, the grandmother of Aiyana Stanley-Jones, a 7-year-old girl who was shot in the head, took the stand and started sobbing, screaming at the defendant. Escorted out of the courtroom, this story has become national news due to defense attorney, Steve Fishman, demanding a mistrial, claiming the outburst biased the jurors.

Due to Michigan law, the judge in these instances is required to speak with each juror, one by one, to determine if they can still be fair and impartial after hearing the facts of the case and reaching a verdict. All jurors said they remained unbiased despite the outburst. Duke reflects, “This brings up the question of whether asking jurors if they are biased is a reasonable test given that we know that bias is generally not a conscious process.”

With the many facets of bias, individuals are unaware when and if they are thinking irrationally. Annie Duke discusses a study conducted by researchers at the University of Arizona about the issue of simply asking jurors if they can be unbiased in their decision. After extensive testing, it was found that jurors did not have the ability to self-assess whether or not they were biased.

“We generally intuitively think we are much better able to access our own biases on a conscious level and control our irrational thinking than we actually are,” Duke writes. “It seems like it might be time to reassess the standard for determining bias in jurors.”

Annie Duke routinely speaks to business leaders and other groups on a wide range of issues from bias to decision making, combining her study of cognitive psychology with her real world experience gained at the poker table to create an impactful and memorable presentation. Follow this link to read what Duke wrote on the topic of jury bias, or visit her website to follow her blog as she frequently discusses various subjects of life.

About Annie Duke
Annie Duke has a strong track record of success in the world of poker. She first burst onto the scene at the 1994 World Series of Poker, where she cashed in three events including making the final three tables of the Main Event. A decade later, she won her first WSOP bracelet and in 2010 became the NBC National Heads-Up Champion when she bested runner-up, Erik Seidel. Duke has appeared on Celebrity Apprentice and tutored Hollywood A-listers including Ben Affleck and Matt Damon on the finer points of the game of poker. She is also the author of three books on poker: Decide to Play Great Poker; Heads-Up Tournament Poker; and The Middle Zone. She also authored an autobiography, How I Raised, Folded, Bluffed, Flirted, Cursed, and Won Millions at the World Series of Poker. 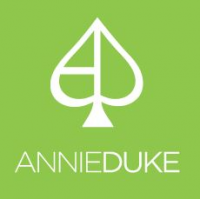