Tarpon Springs, FL -- (SBWIRE) -- 11/01/2017 -- There have been a number of rapid wildfires recently sweeping through California. The cause of the fires is unclear to many, but Dr. Ruggero M. Santilli suggests that some of them they may in fact be due to antimatter asteroids.

Dr. Santilli is the chief scientist at Thunder Energies Corporation. He is a world leader of studies on antimatter and has decades of experience in the research field. His knowledge and expertise have lead him to believe that the cause of the California wildfires could be small antimatter asteroids annihilating in our atmosphere.

"Some of the peculiarities of the recent wildfires in California are the following: The rapidity of their occurrence; the burning of cars at such a temperature to melt their metals; the apparent detection of fireballs coming from the sky; and other unusual occurrences." Said Dr. Santilli.

"Small matter asteroids cannot explain these peculiarities since, following an initial incandescence during their trajectory in our atmosphere, they cool down and drop to the ground without causing any fire. By contrast, small antimatter asteroids are known to annihilate at the contact with our atmosphere by creating an increasing fireball that will either explode in air or on the ground…"

Dr. Santilli further explained, "It should be noted that numerous fireballs followed by wildfires have occurred in the U.S.A. as well as abroad."

In fact, the recent wildfires in New Hampshire were reportedly caused by antimatter asteroid fireballs. Other fires like the Great Chicago Fire of 1871 were likely caused by the same type of event.

Why hasn't this possibility been presented yet? Dr. Santilli says that it may be due to the unfortunate fact that some of his former academic colleagues abuse their academic authority and dismiss and discredit what they consider "fringe science".

Despite this fact, though, Dr. Santilli and Thunder Energies Corporation support due scientific process in the study of antimatter due to its relevance for National Security because, in the event our Country is hit by an antimatter asteroid the size of a football, all our civilian, industrial, and military communications would be disrupted. Due to such a relevance, Thunder Energies Corporation is ready to provide, at no cost, the revolutionary Santilli telescopes for detection of antimatter galaxies and asteroids.

To learn more about Thunder Energies Corporation, their scientific work, and the scientists behind it you can visit their website at www.thunder-energies.com. 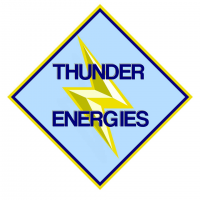