London, UK -- (SBWIRE) -- 11/04/2014 -- Computer software developers  Apt Projects Ltd,   owners of the online TCM Big App Store, have been making public what they believe is a misuse of process by Apple Inc.   Apt say that Apple are opposing Apt’s trademark registration of TCM Big App Store for no valid reason.

Apple have the UK and EU trademarks for ‘App Store’ and claim that the public could be confused between their App Store and the TCM Big App Store.   Apt Projects say that the TCM Big App Store does not sell phone apps, it sells TCM Big Apps which are for use on PCs and Servers and which have been developed using their TCM software development kit. They also say that their zany, quirky branding is completely different from Apple’s App Store branding.

Apt Projects Ltd want this news heard in the US as well as the UK since Apple is a US company and it would be normal to make their press release available in the US.

Last week Apt made available for distribution a press release concerning Apple’s opposition to their trademark application for the TCM Big App Store.   This was accepted by newswire services in the UK and Australia but they were stunned to find that it was it rejected by a US newswire service.  On being pressed for a reason Apt’s US agent reported that the US wire service to which their press release had been submitted had told him “Unfortunately they (the wire service) are not willing to distribute this release in any form, I asked them what needed to be tweaked but they were not willing to touch it at all saying that you should speak to a lawyer.”  .

Our agent went on to say “Your press release is submitted via a single newswire from there the newswire distributes/syndicates it to 1000's of other news sites via FTP and RSS. Unfortunately they are not able / willing to distribute this release stating that it would "create a lot of legal issues for us".  The newswire I use approves 99.9% of the releases I send so the fact that they want to steer well clear of this should also say something. “

Tony Rust, Managing Director of Apt Projects says “It speaks volumes about the power of Apple if a US wire service refuses to distribute a press release for fear of possible action by Apple.  It’s really frightening to learn in this way the authority that Apple appear to have over the news media.   So much for freedom of the press in the US if a newswire service refuses to distribute a press release that has been distributed in Europe and other parts of the world but they will not do so in the US for fear of action by Apple Inc. “

“The press release referred to Apple’s cash mountain of tax avoidance money but this is nothing that hasn’t already been stated by global high profile news networks such as the BBC and Bloomberg .”

“It’s an indication of the uphill task that we face in defending ourselves from being steamrollered by Apple over our trademark Application.   It should be noted that Apple have recently trademarked the specific layout and appearance of their retail stores, that’s fine, they have established their brand in that way.  But they haven’t trademarked the appearance of their on-line App Store, it’s just another webstore.

Our TCM Big App Store, on the other hand, is an online virtual Department Store with 12 floors and 700 Counters and lifts and escalators and rest rooms and a rhinoceros in the Pet Shop on the 8th Floor.  We have a zany, quirky and slightly bonkers approach to marketing.  We are nothing like Apple’s App Store and nothing like their brand.   We don’t sell phone apps, we sell TCM Big Apps.  Apple  would do everyone a big favour if they did in fact call their online store  ‘Apple App Store’ instead of trying to defend the indefensible generic ‘app store’ term.”

In releasing this press release, Apt Projects Ltd hope to reach out to people who believe that the market should be shared by companies willing to properly accept a bit of healthy competition and not one that is dominated by superpowers who are willing to bulldoze whatever is  in their way and suppress innovation and variety.

About TCM Big Apps
TCM Big Apps are business management software solutions designed for specific types of businesses which run on PCs or server networks. They make life easier by simplifying and automating many of the clerical tasks which are a drag on productivity. TCM Big Apps are full of clever time saving and easy to use functions which remove work from the user and provide great reports. Examples would be CRM and sales force automation, or a system for a sports club or equipment hire, or tradesman type businesses - plumbers, heating engineers and the like.

About TCM Big App Store
The TCM Big App Store is the only virtual on line 12 floor, 7 acre 700 counter department store.  It has lifts and escalators and stairs to move you from floor to floor; Cookery and Sports Demonstration Areas, a pet shop with a rhinoceros and fish racing... it’s a zany marketing approach and we invite additions to the Story of the Store which records the history of this virtual building which has the address ‘Kingsbridge, Central London’. 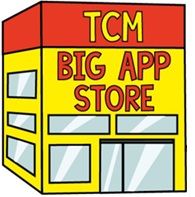