An array of archaeological data suggests a crisis occurred during the reign of the Egyptian Pharaoh Thutmose II during the Eighteenth Dynasty.

Miami, FL -- (SBWIRE) -- 03/19/2012 -- Harvard University educated archaeologist and president of the Paleontological Research Corporation, Dr. Joel Klenck, states an array of archaeological discoveries evidence a crisis during the reign of the Egyptian Pharaoh Thutmose II (ca. 1,492-1,479 B.C.) in the Eighteenth Dynasty. An inscription by the succeeding Pharaoh Hatshepsut (ca. 1,479-1,457 B.C.) in her Underground Temple at Speos Artemidos states that Egypt was “ruined” and “had gone to pieces” before the beginning of her reign. Hatshepsut’s inscription also states that a population of “vagabonds” emerged from former Asiatic populations that once controlled northern Egypt and caused this ruination. Hatshepsut notes these vagabonds were responsible for “overthrowing that which had been made”.

Klenck comments, “The reign of Thutmose II ended between 79 and 86 years after Seqenenre Tao II (ca. 1,560-1,555 B.C.) began to reconquer northern Egypt from foreign Hyksos populations, who controlled Egypt during the Second Intermediate Period (ca. 1,650-1,550 B.C.). Egyptian texts are clear that the son of Tao II, Ahmose I, conquered the Hyksos and captured their capital at Avaris around 1,550 B.C. Yet, this inscription by Hatshepsut notes another population remained in Egypt from ‘the midst’ of the ‘Asiatics’ and ruined Egypt ‘down to my majesty’ or before the beginning of her reign.”

Further, there is evidence that disease affected the royal court before the reign of Hatshepsut. The mummy of Thutmose II is the only corpse of a pharaoh during the Eighteenth Dynasty covered with cysts from an unknown malady. These lesions coat the back, waist, arms and legs of Thutmose II and exhibit a mixture of papules, scabs and scars up to several centimeters in length. These cysts also cover the corpse of the wet-nurse Sitre-In, who was probably unrelated to the royal lineage. In addition, Hatshepsut and her successor, Thutmose III (ca. 1,457-1,425 B.C.), bear traces of the disease suggesting their skin healed after a period of time. Recent DNA evidence suggests that Thutmose III might not be related to Thutmose II. That Sitre-In and Thutmose III show evidence of this disease suggests the disease was not hereditary but widely affected Thutmose II and his court.

A variety of circumstantial evidence also suggests a crisis during the reign of Thutmose II. Klenck notes, “Pharaohs proclaimed their successes and mostly ignored their failures or crises. A troubled Egyptian rule is usually characterized by few artifacts outside the confines of a royal burial associated with a reign of significant duration.” Despite that archaeologist Georges Daressy recorded an inscription that Thutmose II reigned for eighteen years, the ruler has fewer writings, monuments or smaller artifacts attributed to his rule compared to most pharaohs of the Eighteenth Dynasty. Furthermore, building projects belonging to Thutmose II are minimal and comprise an unfinished limestone gateway at Karnak and fragments of construction at Semna, Kumma and Elephantine.

The Egyptian official, Ahmose Pen-Nekhbet, mentioned that Thutmose II conducted a campaign in the Sinai against the “shasu” or wanderers. This campaign may have proved problematic. Klenck remarks “From the end of the rule of Thutmose II and throughout the reign of Hatshepsut, Egyptian armies did not leave their country for a period of at least twenty-two years, until the reign of Thutmose III.”

Public inscriptions by Hatshepsut, after the reign of Thutmose II, show her fear of the Egyptian commoners. On an obelisk at Karnak, Hatshepsut inscribed, “Now my heart turns to and fro in thinking what the people will say.” Hatshepsut’s worry about the opinions of commoners is very unique considering in most periods pharaohs were considered as gods that ruled their subjects with absolute authority. Further, public inscriptions of Hatshepsut portray her as the oldest child, son, male king, and favorite heir of her father Thutmose I (ca. 1,504-1,492 B.C.). Klenck remarks, “Most pharaohs praised previous rulers to show the continuity of successful dynasties. The opposite is true about Hatshepsut’s pronouncements. Despite that Thutmose II was Hatshepsut’s husband and brother; she appears to disrespect his memory in public inscriptions.”

These unique portrayals of Hatshepsut as the eldest child and son of Thutmose I and her twenty-two year reign suggest the priests of Amun-Re and lesser nobles were complicit in these public presentations and extended rule. This support for Hatshepsut differs from most periods in Egyptian history, until the Ptolemaic period, where clerics and court officials usually campaigned to undermine the authority of female pharaohs.

After approximately twenty years of reign, Hatshepsut’s successor, Thutmose III, established a unique program. Inscriptions of Hatshepsut as a male, eldest child, boy, or son were chiseled out, buried, plastered over or covered with stone. However, references or images of Hatshepsut as a queen or female were mostly left intact. Also, Thutmose III added inscriptions of Thutmose II to buildings and structural modifications, despite that the latter had nothing to do with the construction of these edifices and had been dead for decades.

Klenck states, “After the reign of Thutmose II, the Egyptian court seems to have had a crisis of faith in their principal deity Amun-Re.” The inscription by Hatshepsut in her Underground Temple at Speos Artemidos states that Re “did not act by divine command” during the ruination of Egypt before the beginning of her reign. Subsequently, Thutmose III built a temple complex to a competing deity, Aten, at Iput-Isut. The degradation of the worship of Amun-Re culminated during the reign of Akhenaten (ca. 1,353-1,335 B.C.), where the pharaoh converted Egyptian worship solely to Aten. The subsequent pharaohs of the Nineteenth Dynasty that began around 1,292 B.C. returned to the adulation of foreign Hyksos deities, which were worshipped before the beginning of the Egyptian reconquest of northern Egypt by Tao II around 1,560 B.C. Klenck concludes, “An array of direct archaeological evidence and circumstantial data suggests a crisis occurred, during the reign of Thutmose II, which caused a series of actions, alliances, inscriptions and ideological modifications by Hatshepsut and subsequent pharaohs.” 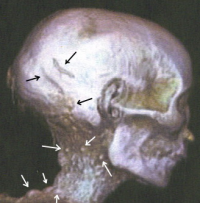 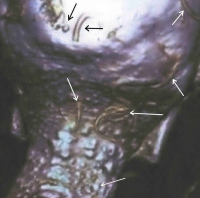