Archaeologists excavate a donkey burial from the Middle Bronze IIB period (1,750-1,650 B.C.) in the Levant and discover the earliest reported equestrian bit.

Miami, FL -- (SBWIRE) -- 03/19/2012 -- Archaeologists led by Professor Eliezer Oren from Ben Gurion University excavated an equid burial at Tel-Haror, an archaeological site located in the Levant with strata dating to the Middle Bronze IIB Period (1,750-1,650 B.C.). Here, archaeologists retrieved the earliest metal equestrian bit. Dr. Joel Klenck, a Harvard University educated archaeologist and president of the Paleontological Research Corporation, who presided over the analysis of the equid remains, states the burial is at the base of a dome-shaped structure. The southeastern wall of the burial edifice is overlaid by a thick mudbrick partition that surrounds a nearby temple complex. An archaeologist specializing in the analysis of faunal remains, Klenck notes the equid is a donkey as evidenced by foot bone measurements and traits on the grinding surfaces of its teeth. In 2011, the skeletal data from the donkey burial was compared to the material assemblage at the site in preparation for a forthcoming manuscript.

Archaeologists are increasingly finding remains of horses and donkeys in ancient Near Eastern contexts. The Vulture Stele, dating to the Early Dynastic III period (2,600-2,350 B.C.) in Mesopotamia, portrays an equid pulling a chariot-like vehicle. Various Mesopotamian manuscripts dating to this period mention the horse, donkey, hemione and hybrids such as the mule. From Sumeria, terracotta reliefs from the early second millennium B.C. show equids pulling a chariot and a human riding horseback. Hittite reliefs from the thirteenth century B.C. in modern Turkey show a larger species of equid perhaps a horse pulling a chariot with three soldiers in contrast to smaller equids in Egyptian murals presumably donkeys pulling chariots with only two men. Horse bones were found at Tell el-'Ajjul in Israel in contexts dated to around 3,400 B.C. and in Turkey at Bogazkoy from the seventeenth century B.C. Archaeologists excavated donkey remains at Tell Brak in Mesopotamia in contexts dating between 2,580 and 2,455 B.C. Egyptian donkey burials dating to Middle Bronze II periods (2,000-1,550 B.C.) include those found at Inshas, Tell el-Farasha, Tell el-Maskhuta, and Tell el-Dab’a. From similar time periods in the Levant, archaeologists excavated donkeys at Tell el-'Ajjul and Jericho.

Klenck notes the donkey burial at Tel Haror is special since this site provides the earliest direct evidence of a metal equestrian bit. These devices continue to be used today to control the movement of horses and other equids. He states, “Until the excavation at Tel Haror, archaeologists had only indirect evidence for the use of bits. An example of this indirect evidence is wear marks on equid teeth at the fortress of Buhen in contexts dating to the twentieth century B.C. At Tel Haror, we retrieved the actual metal device.” The archaeologist notes the ancient bit caused equids to turn due to the force of the device. Also, round plates on either end of the ancient bit exhibit triangular spikes that pressured the lips of the equid if the reins were pulled from one direction. Klenck concludes, “The excavation of the earliest reported metal bit at Tel Haror provides important data concerning ancient equestrian practices and methods of transportation in the Levant.” 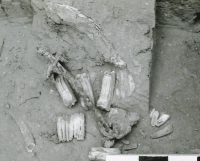 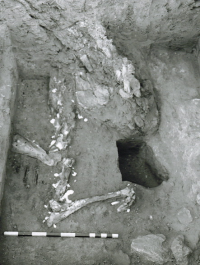