Armenia, My Love is a feature film set to Premiere on April 15th, 2015, at Laemmle Theatres, In Los Angeles.

Tarzana, CA -- (SBWIRE) -- 02/22/2016 -- "Who, after all, speaks today of the annihilation of the Armenians?" wondered Hitler. 101 years have passed since the Turkish Government started the mass extermination of the first Christian Nation: The Armenians.

It all started on April 23rd, 1915, when in Constantinople, (present day Istanbul), the leaders of all the Armenian communities were called for an important meeting, then killed. Then the massacre spread out throughout the empire.

1.5 Million Men , Women and Children were marched to the dessert, starved and killed. Girls were raped and left hanging dead and naked on Crosses, resembling the Crucifixion of Christ. The pictures taken by foreign journalists are well preserved, so we don't forget...

It is only fair to acknowledge and be grateful to the few Turks that took in children and raised them as their own or to those that helped shelter and rescued some few Armenians, that had a chance to start a new life, on new lands. That will never be forgotten!

But the Turkish Government has yet to recognize and ask for forgiveness. The USA has yet to do the same.

"Armenia, My Love" is a film about hope, love and faith. It is not a story of an Armenian family, but the story of the Entire Armenian People ripped from its homeland, raped, killed, revived and strengthened.

"Diana Angelson, a Romanian American actress, writer and director brings "Armenia, My Love" to theaters, in April 2016. She was chosen by Ruben Vardanyan's 100 Lives Foundation, whose co-chair is George Clooney, as one of the people that commemorated the Genocide in a special way. George Clooney's wife, Amal Clooney presented Armenia's case in front of The European Court of Human Rights.

The film's Premiere will be on April 15th, 2015, at Laemmle Theatres in Los Angeles.

About Armenia, My Love
"Armenia, My Love is a feature film, Written and Directed by Diana Angelson. The destiny of a happy Armenian family, living in Turkey, in 1915, whose beautiful dreams will become memories in the eyes of the most famous Armenian American artist, who lives to paint the story of his shattered childhood.

The first Teaser Trailer can be seen here. 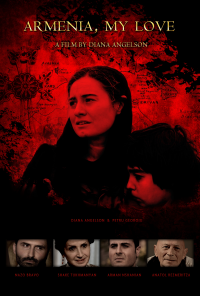