Masterfully crafted by Calgary’s Oliver Perks, ‘Artificer’ thrusts readers into a world where religion and science fuse with results that threaten the future of humanity. While it may only be Perks’ first novel, his unique style and knack for the unexpected are keeping readers glued to the edges of their seats.

Calgary, AB -- (SBWIRE) -- 05/01/2014 -- While most new authors use their debut release to simply test the literary waters, Alberta’s Oliver Perks is quickly proving that a first book is also an opportunity to rival a genre’s best-sellers. Melding science, magic, romance and even humor, Perks’ first foray into literature is with nothing but gusto.

‘Artificer’ pulls no punches when taking its readers deep into a world very much unlike their own. As the Steampunk genre grows in popularity, Perks is hitting the scene with perfect timing.

After graduating from the Artificers' Academy that he has studied at since he was a child, Miles Nummer dreams of using his knowledge to help people. Instead a chance encounter with a church archon leaves him hopelessly entangled with a plot to destroy the heart of the society he lives in.

Miles Nummer is an artificer, born with the ability to blend science and magic. After ten years of study in the artificer's academy he is ready to make his mark on the world. But after being saved from a mob by a beautiful young archon named Sophia Meisters, a soldier blessed with divine powers in the service of the church, the two of them soon find their paths interconnected as the murder of an angel leads to the discovery of a conspiracy to destroy both the church and the government that it supports.

Now they must race against time to unravel a plot involving demons, homunculi, and illegal technology that could destroy the world in the wrong hands, and all the while every clue seems to point to Miles' own mentor being the one behind it all.

“Steampunk is generally enjoyed more by young adult readers, but readers of all ages can revel at my narrative,” says Perks. “It takes somewhat everyday people and throws them into situations that they would never have expected. It’s this break from the norm that makes Artificer so different.”

Continuing, “I’m currently promoting the book very actively. Alberta doesn’t have too many prolific or famous authors to its name, so I plan to work diligently to put us on the literary map! It’s a steep learning curve, but I’m thoroughly enjoying it.”

To date, the novel has garnered rave reviews.

Great story telling. Left me wanting to read more. Should appeal to a younger generation, but any age group should appreciate it,” says Denis Morin.

Robert L. adds, “I like steampunk, so this book got my attention. This was a well-paced book and I enjoyed it right to the end. I really liked the characters and the way they played off each other. There was a good dash of humour and Miles, the main character, had a certain swagger that every confident hero should have. Because of the way it ended, there is obviously going to be another book with these characters and I am looking forward to reading it.”

With such a positive response to his first novel, Oliver Perks plans to stay on the radar for many years to come.

About Oliver Perks
Born in Calgary Alberta, Oliver Perks has been raised on a steady diet of science fiction and fantasy from a young age. In between long bouts of submerging himself in pop culture and raging at his own existence he likes to churn out the occasional book. 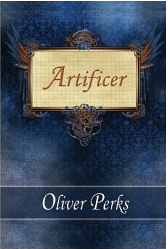