Written, illustrated and designed by Bernard Aquina Doctor, ‘Barack: The Challenges & Achievements of America’s First Black President’ is the definitive portrait of President Obama’s life and career from the beginning of his 2008 campaign to his present second term.

New York, NY -- (SBWIRE) -- 03/04/2014 -- Much has been written about the forty-fourth President of the United States, Barack Obama, but much of it has been biased, subjective or outright hostile, with many authors painting the President in a negative light based on their partisan beliefs.

For the author, this is his sixth book and a project he is very passionate about.

“America has an ongoing struggle with racism, violence and bigotry,” says Doctor. “As a Black artist and writer, I feel a personal responsibility to counter the negativity that surrounds President Obama, and ‘correct the record’, so to speak. I want to educate and inform, but I also want to entertain – which is why I had the idea to include the pictures, graphics and illustrations. It gives the book a wider audience and hopefully, attracts people who may not have picked up the book otherwise. His story is such a fascinating one – it was a pleasure to put this book together.”

Synopsis
This illustrated portrayal of the life challenges and achievements of Barack H. Obama reads like, “A pictorial history book”. Dynamic photorealistic graphics matched with even handed narration presents an objective view of America’s first Black president’s two terms in office and the challenges and issues his administration has confronted from day one.

Barack’s meteoric rise to the most powerful office on the planet underscores what drives and motivates his leadership and his policy decisions. Barack’s story covers his birth and progresses through his first campaign for the presidency. It reveals how his campaign inspired and touched the lives of countless American’s and citizens of the world in ways not experienced since the presidency of John F. Kennedy. At the same time it shows how his political presence ignited racial conflicts and divisions not experienced since the era of president Abraham Lincoln.

In Barack, readers will learn how the processes and procedures that form America’s system of government has staggered under the heavy weight of far right ideology. How special interest groups, ultra wealthy individuals and extremist media fueled a coordinated effort to oppose policies and legislation that the majority of Americans wanted.

Barack: The Challenges and Achievements of America’s First Black President is written and illustrated by Bernard Aquina Doctor, author and illustrator of Malcolm X For Beginners.

‘Barack: The Challenges & Achievements of America's First Black President’ will be available for purchase online in print-on-demand and E-book format in Spring 2014.

About Bernard Aquina Doctor
Bernard Aquina Doctor is a writer and artist living in New York City. A professional visual artist for more than 30 years, Doctor is also founder and president of a facility that provides therapy services for children with special needs. A member of the Center for Global NonKilling Creative Research Committee, this is his sixth book. 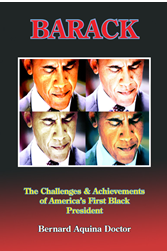