Universal City, CA -- (SBWIRE) -- 01/30/2014 -- Previous winners of the 2013 Artists In Music Awards include Glitter Rose for Best Rock Artist and Album of the Year, Walla for Best Indie Artist, Melanie Taylor for Best Dance Artist, and Soren Bryce for Best Folk/Acoustic Artist return to perform and compete at the finale after nine regular season The Breakthrough Series events, including the Nomination Event held at The Joint in Los Angeles on December 15, where 150 Final Nominees were named in 30 categories.

One Final Nominee from each of the 30 categories and will be called to the stage to accept the coveted 2014 Artists In Music Awards TROPHY. A special award will be presented to Rock N' Roll Hall of Fame Recipient, Michelle Phillips of the Mamas and the Papas for her acceptance of the “Alan Freed Award for Lifetime Achievement”.

A video clip of each nominee will be presented on the mega screen in all competing award categories followed by a presentation of the winner. Recipients will be photographed with his or her trophy on the stage and may elect to pose on the Red Carpet including an exit interview with HR Cole of InDTV with opportunities to interview with several other media outlets.

General Admission: $15 (online price only) $20 at the door
While supplies last, VIP Dinner seating is $55 SOLD OUT

Reserve your tickets today at:
http://aimusicawards.ticketleap.com/2014-awards-ceremony

A portion of proceeds from each ticket sale will be donated to St. Jude Children's Research Hospital, recognized for its pioneering work in finding cures and saving children with pediatric cancer and other catastrophic diseases. Please join the cause with the Artists In Music Awards.

Note: There is NO GUEST LIST. All guests must purchase a ticket in advance or at the door. Each ticket holder will be presented with a wristband. Only people with a wristband or stamp may walk the Red Carpet. No exceptions are allowed.

For more information, go to http://www.aimusicawards.com

Here at the Artists In Music Awards our mission is to entertain, recognize, and represent some of the finest emerging music artists from around the world. Each artist we work with is not a product, but a valued partner. We are committed to providing an engaging and rewarding environment through live entertainment events through Award Shows, Showcases, Red Carpet, and Press Events. 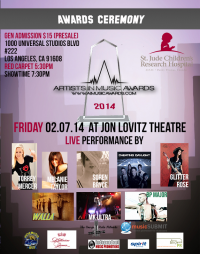