Astronauts Turn to Virtual Reality to Stay in Touch with Earth

Minneapolis, MN -- (SBWIRE) -- 09/25/2015 -- To help Mars astronauts overcome the potential effects of an extended separation from earth, the University of Hawaii is running a NASA funded experiment to let space travelers virtually bring some of their favorite earth-bound places and activities along with them.

In a 12-month mission at a remote site in Hawaii, six scientist crew members have the opportunity to immerse themselves in 3D virtual simulations of earth-bound places and activities as part of their routine activities. Head-mounted displays are used to wrap a 3D world around the participant and create the feeling of being in another location.

The experiment is designed to address the impact of social isolation and a lack of sensory stimulation during a future Mars mission that could take more than a year to complete, and has only asynchronous communication between Earth and Mars.

The exercise began recently on the volcanic slopes of Mauna Loa at HI-SEAS, the Hawaii Space Exploration Analog and Simulation habitat that simulates Martian conditions. The researchers recognized the potential for rich 3D virtual environments to mitigate some of the potential negative effects of isolation and separation inherent in long-duration space voyaging, according to Peggy Wu of Smart Information Flow Technologies, and Dr. Jacquelyn Morie, president of All These Worlds, LLC. Their companies build virtual environments for health, training and other applications.

Their team created a prototype virtual world ecosystem called ANSIBLE to provide a wealth of sensory and cognitive stimulation, including the ability to take virtual vacations, interact with socially intelligent virtual agents, and play asynchronous games with friends and family back home who will use a similar system. The project was named ANSIBLE after the science fiction term for a machine that allows people to receive answers to messages in a reasonable amount of time, even over interstellar distances.

The first prototype of ANSIBLE was delivered to NASA in November, 2014. The full ANSIBLE eco-system was deployed in August 2015 at the HI-SEAS site in Hawaii, where it will be used in the year-long study to evaluate its effects. Six crewmembers, along with their friends and family members, will access ANSIBLE as part of their regular activities during the year of isolation. A previous crew, which did not have ANSIBLE access, serves as the control group. The VR development work is funded by the NASA Human Research Program contract # NNX14CJ06C.

All These Worlds, LLC builds virtual environments and experiences for health, training, and other meaningful applications. It uses the latest research into the benefits that virtual places and avatar use have on people to create highly effective solutions for a broad range of clients. http://www.alltheseworldsllc.com

About HI-SEAS
HI-SEAS is a University of Hawaii long-duration Mars exploration analog study located at approximately 8,000 ft. elevation in an abandoned quarry on the northern slope of Mauna Loa. HI-SEAS hosts a variety of research studies and recently completed a eight-month mission with a crew of six.

A new group of six crew members began their work on a 12-month mission in August. Research topics include food, crew dynamics, behaviors, roles and performance, and other aspects of space flight. http://hi-seas.org

2. Images with links to hires versions that can be downloaded free.

Synchronous messages can be left for crew and family in the Post Office section of ANSIBLE
https://skydeas.smugmug.com/Art/Images-from-the-NASA-ANSIBLE/i-PbJNsT9/A

Virtual vacations in ANSIBLE with a recorded avatar explaining how to use them.
https://skydeas.smugmug.com/Art/Images-from-the-NASA-ANSIBLE/i-nTxhF6c

A foggy morning in an ANSIBLE neighborhood.
https://skydeas.smugmug.com/Art/Images-from-the-NASA-ANSIBLE/i-GcxN3f9

Relaxing at an outdoor campsite in ANSIBLE.
https://skydeas.smugmug.com/Art/Images-from-the-NASA-ANSIBLE/i-ZbqrqZD

Floating by the 3D model of the journey from Earth to Mars in the ANSIBLE Family Communications Center (FAMCOM)
https://skydeas.smugmug.com/Art/Images-from-the-NASA-ANSIBLE/i-878dBfL 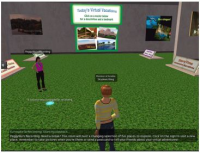 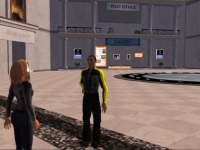