Atlanta Artist Giving Music Lovers His Take on the World

K-Major joins an exclusive short list of producers who have successfully transitioned from wrapping up beats to rapping on beats.

“Music is everything to me. It is who I am. I live in the music because the music lives in me,” said the 21-year-old Atlanta artist. “My music is my way of living and being. I share my life with you in my music and I hope my music lets you celebrate life with me.”

With well over 100,000 Twitter followers and a fresh sound that keeps them loyal, this rap artist is destined for bigger things. His work as heard on his YouTube channel proves this fast-paced young man definitely has something to say and is not afraid to say it. K-Major delivers a full-force sonic bombardment that leaves the listener reeling and wondering, “Where can I get more?” For the Cartersville native, getting his fans hooked on the message and the music is just part of the ride.

“You know, I’ve got something to say. I’m gonna say it. Now you can take what I say and move with it or get left behind,” he said. “But I ain’t got time for you if you ain’t with me. I ain’t hating on nobody, but don’t get in my way either. If you want to come on this ride with me, then I got a place for you. You just know I’m in the driver’s seat and you need to buckle up because we are gonna ride.”

K-Major (aka Kendricke Brown) grew up in a military family and has lived in countries such as Saudi Arabia and Japan. He subtly works his life experiences and perspective into his music, and knows that sometimes a musician has to back off and reflect.

“It’s about life, my life. You know, sometimes I just have to stop and look around. I want to see where I am and where I came from. I know where I’m going, but I never want to forget where I came from. That’s what made me who I am today,” K-Major said. “No, it wasn’t all good. I had some bad times, but you know I came through them. Whatever does not kill me makes me stronger and I have come out stronger and stronger.”

His newest song to drop “Route 66” attracted over 100,000 YouTube views in a matter of days. For those who can appreciate his music, the young man said he most appreciative and humbled.

“It’s like this is ME!” he says explosively. “When someone comes up to me and says, ‘Man, that was some stuff there. It hit me hard.’ That’s just like, man, nothing else. To know that I reached somebody and they reached back to me, it just don’t get better than that.”

His work can be seen at YouTube.com/KMajorLive. For more information visit http://KMajor.com/.

About K-Major
K-Major (real name Kendricke Brown) was born in Cartersville, Georgia and now resides in Atlanta. He produced music for BET's "The Game" and was featured in the WWE movie "Knuckleheads. K-Major has worked with well-known musicians including: Lil Twist, 2Chainz, Lil Chuckee, Issa, Keith Robinson (Dream Girls), and Kid Ink. K-Major is managed by Coach K. 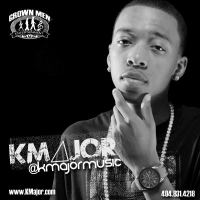