SG Night’s ‘The Three Acts of Penance’ series throws readers into a fantastical world where they’ll experience the ultimate fight for survival. With volume one remaining a top-100 Best-selling Dark Fantasy book on Amazon since October, Night’s upcoming second installment is poised for the same success.

Ashburn, VA -- (SBWIRE) -- 12/04/2013 -- While most new authors use their debut release to simply test the literary waters, SG Night is proof that a first novel can also be an opportunity to compete with its genre’s best-sellers. What started as a unique writing project at the age of fourteen has since flourished into an Amazon top-100 novel that has achieved critical acclaim.

‘Attrition: The First Act of Penance’ forms part of the larger ‘Three Acts of Penance’ series; a story of sword and sorcery, tyranny and rebellion, love, and the fight for survival.

They came by night. We couldn't stop them. Io burned. It is the 107th year of the Fourth Age. Our conquerors, the Demonic Dominion, have solidified their rule over our homeland. The Humans are in shackles. The Elves are in exile. And we, Io's proud Majiski battle-mages, are standing at extinction's edge. The mighty Grey Wall has sealed us all inside the Demons' cruelty…and after a hundred long years, the world beyond is all but forgotten.

The Genshwin are all that remain of the Majiski: just a few hundred survivors sequestered in an underground fortress—masters of shadow and steel. In secret, they work against the Dominion. But how much can three hundred Majiski really expect to accomplish? Especially when their Patriarch is keeping more secrets than the Demons themselves. Racath Thanjel is the best the Genshwin have to offer. He’s young, fast, strong, and brilliant…and constantly at odds with his Patriarch’s rules of discretion. But something's changed.
Soon, Racath finds himself swept up into a spider web of conspiracies, lost knowledge, and the prophetic pages of ancient scripture. And now, all his hopes depend upon a girl with golden hair, an aging Majiski warrior, and a sword wrought by God Himself….

As the author explains, finding literary success so young has been a huge privilege.

“I began writing four years ago but really didn’t think it would go beyond me sharing the manuscript with friends and family. I’ve now got a hardcore fan base around the world and am currently writing my sequel,” says Night, now eighteen years-old.

Continuing, “This second book will continue the saga and give readers an even deeper insight into my world and its characters. I’m also on the lookout for a larger publisher to partner with. It appears this series is going to be big – so we need to prepare!”

For example, M. J. Cunliffe commented, “I was absolutely blown away by the quality of writing from this 18 year old first time author. The story is intricate without being overly complex, and each character has depth and distinct personality. The story grips you from the start as the principal protagonist, Racath, grows into his powers, and fights to free the Kingdom of Io from the shackles of its Demon overlords.”

Another reader was equally as impressed, adding, “This book is intended for the young adult, but I can't imagine any adult not loving this. If fantasy and sci-fi seem a little overdone to you, seriously, give Night a shot. He's taken classics and reworked them into brilliance.”

‘Attrition: The First Act of Penance’ is available now: http://amzn.to/IADg4P.

About SG Night
SG Night has had stories growing in his head since birth. He began the final version of "Attrition" at the age of 14, and finished shortly before turning 18. He's a storyteller, a cynic, and a libertarian—a sucker for puppies and English musicals about French people. He enjoys the winter, writing before the break of day, and the company of fire. 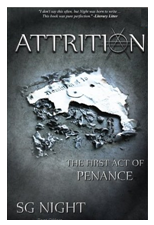