Yellville, AR -- (SBWIRE) -- 12/26/2013 -- Charles Boles AKA Black Bart was released from San Quentin Prison. This coming January marks the 125th year anniversary of his release. Bart pulled his last known stage coach robbery in November 1883, not far from Sonora California. After successfully pulling off dozens of other robberies over the years, Black Bart was arrested and convicted of the Sonora robbery because of a dropped handkerchief. Sentenced to six years, he served only four, being released early for good behavior. This was the only stage coach robbery he was convicted of.

In his new book, Black Bart Reborn, author Steve Bartholomew chronicles the life of Black Bart. This fictional work jumps off after Black Bart is released from prison. His last known location was a hotel in Visalia on February 28. The only trace of him was a handkerchief left behind in the hotel room. 1888 was a leap year and Bartholomew leaps into Black Bart’s life after prison, taking readers on a fun journey in Black Bart Reborn.

Among the legend that is Black Bart, it is said that he would stand in the road in front of an oncoming stage coach and point a 12-gauge at the driver. Among the many interesting facts known about Black Bart is that he never fired a shot during his robberies, never physically harmed anyone and it is said that his gun was never loaded!

Steve Bartholomew is the author of eight books. For more information on his work, visit http://whitehallpublishing.com/sb.html or http://chargedbarticle.org. To see all of Steve Bartholomew’s books, visit his author page on amazon.com at: http://www.amazon.com/-/e/B002CB3W9Q. 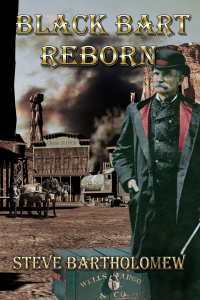