With his school community devastated by the historic storm, author and teacher Frank Nappi has committed to donating proceeds from his latest novel to Oceanside Community Service

Oceanside, NY -- (SBWIRE) -- 11/14/2012 -- After Hurricane Sandy devastated Oceanside, NY, author Frank Nappi wanted to find a way to help the community where he has taught high school English for more than 20 years. Nappi is today announcing that all of the proceeds from his latest book, Nobody Has to Know, will be donated to Oceanside Community Service for the next month, in an effort to assist rebuilding efforts. The slogan of Oceanside Community Service, a volunteer organization, is “Neighbors Helping Neighbors – for Over 60 Years.” This slogan represents what is currently happening in Oceanside.

“I have been teaching at Oceanside High School for a long time, and this community is like a second home to me. Many residents, including my students, are still without power and many homes have been significantly damaged by flooding” says Nappi.

Oceanside was hit extremely hard by the historic storm; a large portion of the community saw their homes fill with saltwater and many others with sewage. A ton of the homes in Oceanside are uninhabitable, forcing residents to seek shelter in other towns indefinitely. One of the local elementary schools was so badly damaged, students had to be relocated to another one of the district’s elementary schools. Over 120 school busses were lost and power was nearly non-existent throughout the neighborhood. Power is still out for a large number of residents.

There is a lot of work to be done in Oceanside to return a sense of “normalcy” to the residents of the close-knit south shore community.

Nappi is hoping that people will check out his first thriller and support a worthy cause at the same time. “I know that Oceanside can be restored to what it once was, but I am asking for readers everywhere and fans of good thrillers to help Oceanside rebuild.”

Nobody Has to Know, is Nappi’s first thriller. The book tells the story of Cameron Baldridge, a popular high school teacher whose relationship with one of his students leads him down an unfortunate and self-destructive path. Stalked through text-messages, Baldridge fights for his life against a terrifying extortion plot and the forces that threaten to expose him. Nobody Has to Know is a sobering look into a world of secrets, lies, and shocking revelations, and will leave the reader wondering many things, including whether or not you can ever really know the person you love.

“Nobody Has to Know is a masterfully written tale that is expertly told. Frank Nappi knows how to entertain the reader from start to finish,” noted DeMille. DeMille also shared that the book is “…a haunting, briskly-paced page turner that explores the darkest recesses of the human psyche.”

Nappi’s book has been well received and he is now hoping that the book is successful for many reasons.

Nobody Has to Know is available for purchase at Amazon.com in both ebook format and paperback.

About the Author: Frank Nappi
Frank Nappi has taught high school English and Creative Writing for over twenty years. His debut novel, Echoes From The Infantry, received national attention, including MWSA's silver medal for outstanding fiction. His follow-up novel, The Legend of Mickey Tussler, garnered rave reviews as well, including a movie adaptation of the touching story "A Mile in His Shoes" starring Dean Cain and Luke Schroder. Frank continues to produce quality work, including Sophomore Campaign, the intriguing sequel to the much heralded original story and the just released thriller, NOBODY HAS TO KNOW, which received an endorsement from #1 New York Times bestselling author Nelson DeMille. Frank is presently at work on a third installment of his Mickey Tussler series and his next thriller. He lives on Long Island with his wife Julia and their two sons, Nicholas and Anthony. 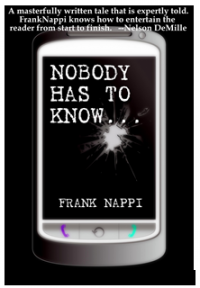