Author J.E. Rasmussen to Launch Cash for Caches - a Real Live Treasure Hunt Campaign in May 2014

Cash for Caches is a geocaching activity: participants find hidden objects by using GPS coordinates posted on a website. Rasmussen’s treasure hunt will occur over six days in six states, five of which are confirmed: California, Oregon, Utah, Georgia, and New York. The last location is a mystery city on which voters are welcome to decide. All participants will be competing for a chance to win the grand prize of $10,000 per cache.

At this time, Rasmussen and her team are accepting donations to fund the Treasure Hunt campaign. The team’s goal is to collect $80,000 by March 31, 2014.

Contributors will receive a variety of perks in exchange for their contributions. By donating just $1, supporters will gain access to the geo-coordinates surrounding each cache and one clue for each cache. For a donation of $35, participants will receive a decorative geocoin that includes a decoder, useful for deciphering an extra clue for each cache. Corporations who wish to sponsor the activity can also obtain product placement within “Twelve for Twelve” and more.

Individuals interested in learning more about Rasmussen and the “Twelve for Twelve” treasure hunt can visit the campaign’s Indiegogo page for additional information. Customers can also subscribe to Cash4Cache’s Facebook and Twitter accounts for frequent updates from the Buried Treasure campaign.

J.E. Rasmussen is a published author who also writes under the name Eliott McKay.

About J.E. Rasmussen
J.E. Rasmussen is originally from the Dixie of the MidWest, otherwise known as Southern Utah. She loves Disneyland, her nieces and nephews, and finds great satisfaction in stirring up the elixir of trouble. She also writes under the name Eliott McKay. The Cash for Caches campaign goes along with the theme of Rasmussen’s new book, “Twelve for Twelve,” in which the main character hires bad guys to perform illegal deeds in her evil plot for revenge and buries the payments in geocaches for them to find. For more information, please visit http://igg.me/at/cashforcaches/x/5937395 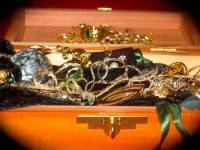